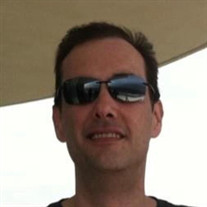 Beau Bruce, 49, died on May 13, 2019 at Centennial Medical Center after leading a life of intellectual discovery on his own unique terms. A brilliant rebel, Beau was always the smartest person in the room, and because of this, he didn’t conform to societal expectations. Born on March 9, 1970, he was raised by parents Patsy and Ed Bruce in Nashville. He skipped two grades at Peabody Demonstration School and attended Webb School, where he played soccer and met best friend David Hudson in 1981. During his senior year, the school established its first quiz bowl team. Beau, a math savant who had little interest in maintaining good grades, answered every question in the competition, allowing Webb to finish third out of 42 teams. He graduated from Webb in 1987 and attended MTSU. He was a larger-than-life character who was popular, jocular, laid back and non-judgmental. He loved having a good time and treating others well. He always gave money to anyone on the street who asked, because, as he said, “That could be us.” He chose his jobs for the adventure, not the prestige or money. He loved music and thrived during his time in the early nineties at MCA Music Publishing, where he was adored by the songwriters that he so admired. He moved to Chicago in the mid-nineties and worked for nearly ten years at several trading firms, where he loved the fast pace and the immersion into numbers. He moved back to Nashville in 2011 and enjoyed delivering pizzas, shooting pool, bowling, playing chess, reading books by J.R.R. Tolkien and spending time with his nieces. A great cook who made a world-class omelet, he loved to eat Asian food and listen to traditional country music. He is survived by his parents, Patsy Bruce and Ed Bruce; brother Trey Bruce (Laci); sisters AnnMarie Pinhal (Joey) and Ginny Bruce; nieces Chelsea Jensen, Sela Bruce, Catherine Pinhal, Juliana Pinhal, Sara Bruce Manual and Maggie Emmick; nephews Joseph Pinhal, Patrick Elder; and Christina James, Chevy and Bella James. A celebration of his life will be announced soon. In lieu of flowers the family asks donations be made in Beau's honor to Webb School, 319 Webb Road East, Bell Buckle, TN 37020. .

Beau Bruce, 49, died on May 13, 2019 at Centennial Medical Center after leading a life of intellectual discovery on his own unique terms. A brilliant rebel, Beau was always the smartest person in the room, and because of this, he didn&#8217;t... View Obituary & Service Information

The family of William Patrick "Beau" Bruce created this Life Tributes page to make it easy to share your memories.

Send flowers to the Bruce family.