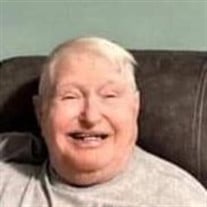 Richard Lee Jackson “ Papaw” born Dec 4,1932 in Wellington, Ks went to be with his Lord and Savior Jesus Christ June 28, 2021 after a long brave battle with cancer. He lived everyday of his 88 yrs exemplifying the true meaning of Christian. Richard was retired from the Air Force, serving in the Korean War. He was also retired from the U.S. Postal Service as a special delivery carrier in Albuquerque NM riding in the train grabbing mail sacks at 60mph from a hook! He worked for Berrys Jewelry and Loan as well, when he first moved to Nashville. He was a member of Bear Run Baptist Church in New Lexington, Ohio. He loved reading his Bible( later listening to it on audio when he lost his sight to cancer), working on clocks and watches and taking long rides with his sweetheart (wife) Gloria. He had the dubious honor of singing in Rev Billy Graham’s choir at one of his revivals. Richard had also served as a volunteer, loved to travel and dearly loved his family and above all The Lord. Those left to cherish his memory are his sweetheart of 20 years Gloria, daughter Tena (Tim) Sutton, stepchildren Sandra (Larry) Hurford, Donna (Roger) Mills, Jerry (Denise) Lemay, Pam (Jack) Clark, special brother Don (LouAnn) Jackson, also 13 grandchildren (11 Ohio), 28 great-grandchildren (18 Ohio), 19 great-great grandchildren (11 Ohio), Special friend Lisa Hoover and his faithful companion Pekachu. In addition to his parents Homer and Nora (Schauwecker) Jackson, Richard was welcomed into heaven by his first wife Mary (Wilson) Jackson who passed March 29, 1999; his grandsons Doug Strong and John Donaldson II, and his siblings Margaret (Jackson) (Leon) Remington, Betty Jean Jackson, Billy (Beverly) Jackson, Jerry (Singrid) Jackson, nieces Rita (Jackson) Crysell and Debbie Jackson. Special love and thanks to our Ohio family for the love and care they gave Dad/Papaw these years and especially the last 6 months. Visitation will be Friday July 16 from 4-8pm and Saturday July 17 from 10-12 with services at 12pm conducted by Pastor Aaron Allison at Phillips Robinson 2207 Gallatin Pk. Interment at Hendersonville Memorial Gardens Mausoleum. In lieu of flowers , please donate to Old Dogs Sanctuary in Mt Juliet Tn or Safe Place for Animals in Gallatin, TN, in Richards name.

Richard Lee Jackson &#8220; Papaw&#8221; born Dec 4,1932 in Wellington, Ks went to be with his Lord and Savior Jesus Christ June 28, 2021 after a long brave battle with cancer. He lived everyday of his 88 yrs exemplifying the true meaning of... View Obituary & Service Information

The family of Richard Lee Jackson created this Life Tributes page to make it easy to share your memories.

Send flowers to the Jackson family.