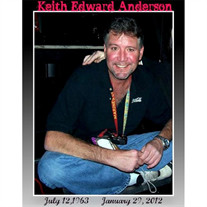 Keith E. Anderson, 48, of Nolansville, TN, passed away Sunday Jan. 29, 2012. Born July 12, 1963 in Aliquippa, he is a son of Edna (Swink) Anderson of Center Twp and Charles (Susie) Anderson of Summerville, SC. Keith was currently employed as a tour manager for the country music band Rascall Flatts, and was formerly employed as a tour manager for Brooks and Dunn, Bon Jovi and many other popular bands. He was a devoted father, son, brother and friend who will be remembered for his big smile and contagious laugh. He will be sadly missed by all who loved him. Surviving in addition to his parents, are 2 sons Kyle and Tyler Anderson both of Edmonton, Canada; 2 brothers and sisters in law Terry and Marti Anderson of Summervile, SC, David and Julie Anderson of Center Twp, and many loving nieces and nephews. Friends will be received Friday from 4-8pm in Tatalovich Funeral Home and Cremation Services, Inc, CENTER TWP, 3474 Brodhead Rd, Monaca, Pa 15061. Family and friends will gather Saturday at Bunkerhill Community Church in Center Twp, where a service will be held at 11am, with Rev. Paul Zaparach, officiating.

The family of Keith E. Anderson created this Life Tributes page to make it easy to share your memories.

Send flowers to the Anderson family.