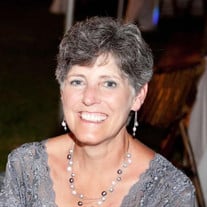 After surviving the challenges of ovarian and brain cancer for 11 years, Kathy Jane (Blank) Smith, 68, of Nashville, Tennessee, formerly of Effingham, Illinois, passed away peacefully at home at 6:36 a.m. on December 25, 2020. She was surrounded by family, including her beloved Goldendoodle, Izzy, who was named after Dr. Israel Zighelboim, the surgeon who saved her life during her first grueling surgery and difficult first rounds of chemotherapy. Kathy was born August 1, 1952 in Carbondale, Illinois, to the late Harold J. Blank and Christina (Bryant) Blank. She is survived by her husband of fifty years, Charles Ross Smith, her son, Justin Smith (Rena) of Crestwood, KY, and her daughter, Jennifer Wolczyk (Ian) of Nashville, TN and grandchildren Jacob and Suzannah Smith, Violet and Roman Wolczyk. Kathy is also survived by: her siblings Karen Blank-Ewell of Effingham, Kristina Blank Makansi (Jason) of Tucson, AZ, James Blank (Laura) of Catonsville, MD and as well as Emma Smith, Kaye Kimpling (Terry) of Effingham; John Smith (Susan) of Carbondale, Deb Gregory (Gary) of Edgewood, and nieces and nephews: Bonnie Kimpling, Laura Estrada, Kristina Lehman (Jonathan), Charlie Ewell (Sarah), Amira Makansi, Elena Makansi, Amy Blank, Stephen Blank. Having grown up in a family that loved hiking, camping, and exploring the outdoors, Kathy relished long walks and taking photos of nature, especially trees, flowers, and bees. She met her husband, Charlie, while attending Little Grassy United Methodist Church Camp in Southern Illinois, and they married in August 1970. They celebrated their 50-year anniversary this past August by camping and biking in Southern Illinois. Kathy loved living on Lake Sara, outside of Effingham, and enjoyed boating and waterskiing, even skiing as late as August this past summer. She also enjoyed snowskiing, scuba diving, visiting state and national parks across the country, and traveling abroad. Taking after her beloved Aunt Helen, Kathy enjoyed learning about family history and listening to family stories. She often spent her free time reading historical fiction and biographies of historical figures. After getting her nursing degree and starting her medical career, she went back to night school and received a Bachelor’s degree from Eastern Illinois University. After two dangerous bouts of rheumatic fever as a child which caused her to miss a significant amount of school, she participated in clinical trials on the effects of long-term penicillin treatment. Later, after she was diagnosed with cancer, she participated in ovarian cancer clinical trials and firmly believed in supporting research in science and medicine. She began her nursing career as an Emergency Room nurse and nearly 30 years as a dialysis nurse. She was dedicated to helping others and had a caring, careful, and precise manner that engendered trust and respect from patients and colleagues alike. Kathy was gentle, compassionate, and curious with a sense of adventure and a love of learning, As a life-long member of the United Methodist Church (UMC), she went on medical and hurricane-relief missions to Central America, the Caribbean, and the Gulf of Mexico, and helped build and renovate homes in Henderson Settlement in Kentucky. For years, she played handbells in the Centenary UMC choir in Effingham where she also taught Sunday School and volunteered with the youth group. Later in life, she discovered a love of personal fitness and enjoyed Crossfit several times a week. Kathy was a devoted friend whose relationships spanned decades and long distances. She was a good listener, a silly and generous grandma, an advocate for those less fortunate, a voice for the voiceless, and a beautiful, loving daughter, wife, sister, and mother whose memory will be forever treasured by those she left behind. Due to Covid-19 travel restrictions, there will be no memorial service at this time. She will be interred at Rose Hill Cemetery in Marion, IL next to her parents. Donations in Kathy’s name may be made to the United Methodist Committee on Relief (UMCOR), Henderson Settlement or to the Ovarian Cancer Research Alliance.

After surviving the challenges of ovarian and brain cancer for 11 years, Kathy Jane (Blank) Smith, 68, of Nashville, Tennessee, formerly of Effingham, Illinois, passed away peacefully at home at 6:36 a.m. on December 25, 2020. She was surrounded... View Obituary & Service Information

The family of Kathy Smith created this Life Tributes page to make it easy to share your memories.

After surviving the challenges of ovarian and brain cancer for...