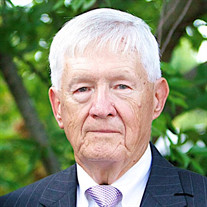 John Martin Morris, III, of Suwanee, Georgia, passed away Saturday, December 14, 2019, at Alive Hospice in Nashville, Tennessee. John was born in Paragould, Arkansas on January 27, 1941 to the late John Martin Morris, Jr. and Virginia Taylor Morris. John, Jr. and Virginia moved to the unincorporated community of Arp, Tennessee in 1943 to run the J.M. Morris & Sons general store and cotton gin. John served as class President and was named to the All-West Tennessee football team while attending Ripley High School in Ripley, Tennessee, where he graduated in 1959. He received his Bachelor of Science degree in Mathematics from the University of Tennessee in Knoxville in 1963. After graduation, John served in the United States Air Force for four years, achieving the rank of Captain. He married the late Medora Hopkins Gore on September 29, 1968 in Nashville, Tennessee. In 1970, John was employed by Duncan Williams Inc. in Memphis, Tennessee where he served as a bond trader and securities underwriter for over a decade, eventually as the firm’s Executive Vice President. He worked as a bond trader his entire 30-plus year career for firms including Union Planters, First Tennessee, First Securities of Charlotte, and eventually retired from The Banker’s Bank of Georgia in 2008. He was an active member of the John’s Creek Baptist Church in Alpharetta, GA, Germantown Baptist Church in Germantown, TN, Sharon United Methodist Church in Charlotte, NC, and Wesleyan Hills United Methodist Church in Memphis, TN. John was an avid golfer and could recount an entire round played years ago shot-by-shot, if given the opportunity. He spent many hours quietly reading a variety of books, watching the Atlanta Braves, or cheering on his beloved UT Volunteers. His penchant for listening versus speaking coupled with a quiet confidence helped earn him the nickname “Silent John.” John was a devoted husband and father. His sons are especially grateful for the love and care he provided their mother during her battle with cancer. He is preceded in death by his beloved wife Medora Hopkins Gore Morris of Nashville, Tennessee; his parents John Martin Morris, Jr., and Virginia Taylor Morris; and is survived by his sons, John Martin Morris, IV and his wife Carol Joyce Morris of Cane Ridge TN; and David Gore Morris of Charlotte, NC; and his sisters, Sarah Morris Laskaris of Nashville, TN; and Linda Morris Sanders of Etowah, NC; and his brother, George Taylor Morris of Evans, GA; and his granddaughter, Elisabeth Hayes Morris of Charlotte, NC. John’s family wishes to extend our sincere thanks to cousins Virginia Elizabeth Reynolds, and Sara Medora Reynolds Frederick for their love and care over the past six months. Special thanks also to the staff at Alive Hospice. A memorial service will be held at First Lutheran Church, 113 8th Avenue South, Nashville, TN 37203 at 1:30 p.m. on Saturday, January 25, 2020. The family will receive friends at a reception following the service at Amerigo Restaurant 1920 West End Avenue, Nashville. In lieu of flowers, the family asks that memorials be given to Alive Hospice of Middle Tennessee (https://www.alivehospice.org/donate) or The National Multiple Sclerosis Society (https://www.nationalmssociety.org/). Arrangements were provided by Phillips-Robinson Funeral Home, Nashville, Tennessee.

The family of John Martin Morris III created this Life Tributes page to make it easy to share your memories.

Send flowers to the Morris family.