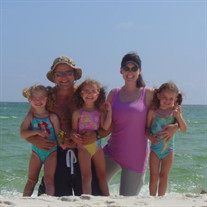 Corey Lawrence Sanderson, age 50 of Nolensville, passed away October 14, 2019. Corey served with the Metro Nashville Police Department for 26 years. During his time with the Metro Police Department, Detective Sergeant Sanderson worked with the Narcotics Unit for 10 years and was the supervisor for the Surveillance and Investigative Support Unit. Over his lengthy career, Corey was highly respected and highly decorated, receiving numerous commendations, accolades, and awards, including Inspector of the Month on multiple occasions, Investigator of the Year, several yearly Police Commendations, multiple Chief's Coins, the Excellence in Law Enforcement Award from the United States Department of Justice, and many more. Although he received many awards throughout his career in Law Enforcement, he was most proud of his wife, daughters, parents, and sister. He dedicated all of his time to ensuring his family's happiness and well-being. Corey loved to brag about his wife and children and all their many accomplishments. Emily the swimmer. Taylor the artist. Alece the golfer. His beautiful and loving wife, Carey. He made sure to tell them every day how proud he was of them and how much he loved them. Corey is survived by his wife of 22 years, Carey Sanderson; daughters, Alece Morgan Sanderson, Taylor Devyn Sanderson, and Emily Layne Sanderson; parents, Ralph “Larry” Sanderson and Reba Nell Sanderson; sister, Susan Sherick (Michael); sisters-in-law, Tracey Peek and Mindy Capps (Wes Marcum); brother-in-law, Curt Capps; nieces, nephews, and many other family and friends too numerous to name. Visitation will be at Cornerstone Church, 726 W. Old Hickory Blvd. Madison, TN 37115, Friday, October 18th from 5pm until the time of service at 7pm. In lieu of flowers please make memorial donations to the Fraternal Order of Police, nashvillefop.org or the Metro Nashville Police Department Christmas Baskets Program, nashville.gov.

The family of Corey Lawrence Sanderson created this Life Tributes page to make it easy to share your memories.

Send flowers to the Sanderson family.