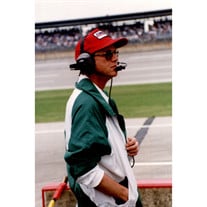 SADLER, Chester Goodwin "Check," Age 64, Passed away Friday, October 2, 2015, at his home in Nashville. He was born July 10, 1951, in Davidson County, TN. Mr. Sadler was preceded in death by his parents Earl Harlin Sadler and Vera Goodwin Sadler, his brother Earl Harlin Sadler, Jr., and his former wife, Julie. He is survived, by his devoted daughter, Cara Iva Lee Sadler, of Franklin, TN. Other survivors include: Nephews, Nieces, and their children, many loving cousin's, along with his very devoted caregivers, Gloria and Jennifer. Mr. Sadler was with Sadler Brothers Trucking and Leasing. He and his father formed Sadler and Son Racing Team with NASCAR running in the Daytona 500 in Car 95. Some famous race drivers got their start driving for Sadler and Son Racing Team in Car 95. Mr. Sadler attended Battle Ground Academy and Hillsboro High School; he also attended Peabody and University of Tennessee. He was a member of the Kappa Phi Fraternity. He was very loving, kind and extremely patient individual. "When there was a need he was always there." Visitation will be at Phillips-Robinson Funeral Home, 2707 Gallatin Rd., on Wed., Oct. 7 from 6pm-8pm. The service will be Thurs. Oct. 8 at 10am in our chapel with Rev. Brett Wesley Brown officiating. Interment at Spring Hill Cemetery immediately following the service. Family and friends will serve as Pallbearers. PHILLIPS-ROBINSON FUNERAL HOME, (615)262-3312.

The family of Chester "Check" Goodwin Sadler created this Life Tributes page to make it easy to share your memories.

Send flowers to the Sadler family.