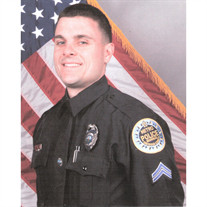 Andrew David Nash, age 30, passed away suddenly on April 14, 2014 at his home in South Nashville. A lifelong resident of Nashville, he is survived by his immediate family, parents, Bob and Barbara Nash; two loving sisters, Amanda Baldwin (Norm) and Diane Nash; and his cherished nieces and nephew, Anna Baldwin (10), Mary Lauryn Baldwin (5), and James Robert Baldwin (3). He also leaves behind his maternal grandmother, Genevieve Ronan, and many aunts, uncles, and cousins. Andy joined the Metro Nashville Police Department in 2007 after having served four years in the United States Marine Corps, deploying to Iraq twice between 2003 and 2007. He served as a field training officer out of the South Precinct. He had recently joined the Department's on-call SWAT team. Andy also served as Treasurer of the Fraternal Order of Police Andrew Jackson Lodge #5 with great devotion and energy. Andy was a 2001 graduate of John Overton High School. He received an Associates' Degree from Nashville Tech Community College in 2003 and in December 2013, graduated cum laude from David Lipscomb University with a Bachelor's Degree. Andy will be deeply missed by his family, friends, Marine Corps comrades, and fellow officers on the Metro Police Department. His life was exceptionally well lived. The Mass of the Resurrection will be celebrated by Rev. Joseph Patrick Breen at St. Edward Catholic Church on April 25th at 10:00 a.m., followed immediately by a reception for family and friends at the FOP Andrew Jackson Lodge #5 located at 440 Welshwood Drive in South Nashville. In lieu of flowers, the family requests that donations be made in Andy's honor to any of the following: the FOP Andrew Jackson Lodge Youth Camp, 440 Welshwood Dr. Nashville, TN 37211; The Wounded Warrior Project; Hope Clinic for Women in Nashville; St. Edward School Tuition Assistance Program. Phillips-Robinson Funeral Home, 262-3312.

The family of Andrew David Nash created this Life Tributes page to make it easy to share your memories.

Send flowers to the Nash family.