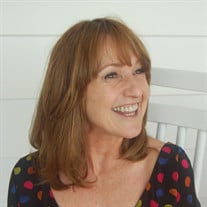 Allison Lynn “Lynsey” McDonald, age 58, passed away November 23, 2020 after fighting a courageous battle against multiple myeloma for more than eight years. She leaves behind the joy of her life, her son, Gates Knight; her former husband and wonderful parenting partner, Sam Knight; her parents, Darrell and Marilyn McDonald; her beloved aunts Linda Lesley and Faye McDonald, her uncle Roger (JoAnn) Coe, numerous cousins, and a host of wonderful friends. She was preceded in death by her grandparents, Herman and Annie Lou McDonald and Henry and Evelyn Coe, and her uncles Earl, Terry, and Robert McDonald and Harold Coe. Lynsey grew up in Chattanooga and began playing sports at a very young age. She played competitive fast pitch softball from the age of eight to twenty for teams coached by her father. She played basketball and softball for Tyner High School. She also excelled at tennis. After graduating from Tyner in 1980, Lynsey attended Middle Tennessee State University and received a B.S. degree in Recording Industry Management in 1984. She then moved to Nashville to begin her career in the music business. Although blessed with a beautiful singing voice and an exceptional ear for music, Lynsey made her name on the business side of music and was best known for her work in artist management with some of Nashville’s leading rock-oriented companies, such as Praxis International, Vector Management, and her own Magnolia Way Management. Along the way, she helped guide the careers of an array of talented recording artists, including Jason and the Scorchers, the Georgia Satellites, Todd Snider, Robbie Fulks, Deanna Carter, and producer Jay Joyce. In addition to working in artist management, she also worked for Rising Tide Records, Thirty Tigers, CMT, and TomKats, where she helped launch the Loveless Barn music venue and in turn helped launch the live Americana series Music City Roots, which was originally staged at the Barn. For those wishing to make a memorial contribution, Lynsey’s favorite charity was Second Harvest Food Bank, 331 Great Circle Road, Nashville, TN 37228. There will be a Memorial Service at a later time. The family would like to thank Dr. Berdeja and the staff at Tennessee Oncology and Alive Hospice for their excellent and compassionate care.

Allison Lynn &#8220;Lynsey&#8221; McDonald, age 58, passed away November 23, 2020 after fighting a courageous battle against multiple myeloma for more than eight years. She leaves behind the joy of her life, her son, Gates Knight; her former... View Obituary & Service Information

The family of Allison Lynn McDonald created this Life Tributes page to make it easy to share your memories.

Send flowers to the McDonald family.