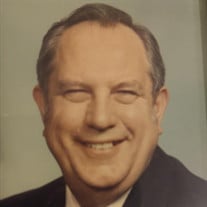 William “Bill” Bryan Roehrig Jr., age 92, of Nashville, TN passed away on September 25, 2020. Bill was born on August 10, 1928 to William Bryan Roehrig Sr. and Meta Doeschler Roehrig in Lexington, KY. Bill graduated from East High School in 1946 and earned his business degree from Vanderbilt University in 1950. After college, he joined the Army serving until 1952 then taking over his family business, Nashville Office Machines Company until he retired in 1991. He and his wife, Sarah were founding members of Dalewood United Methodist Church where he sang in the church choir. He had a love for life, family, friends and Vanderbilt Commodores football. He is preceded in death by his parents, sister, Anita Campbell; wife, Sarah Joyce Hill Roehrig and son, William “Bryan” Roehrig III. He is survived by three of his children, Sharon (Joe) Wilson, Linda (Greg) Arnold and David (Patricia) Roehrig; grandchildren, Sarah (Tyler) Roberts, David Roehrig Jr., Gregory Arnold Jr. and great grandson, Easton Roberts. There will be a gravesite service on Thursday, October 1st at Spring Hill Cemetery starting at 12:00 PM. Flowers that are purchased for the family will be brought to the gravesite service. If you would rather, please donate to your favorite charity or animal shelter in his name.

The family of William "Bill" Roehrig Jr created this Life Tributes page to make it easy to share your memories.

Send flowers to the Roehrig family.