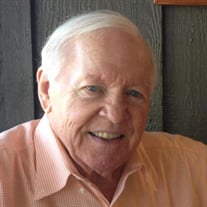 William Dalton Castleman of Nashville, TN age 87 passed away on June 11, 2020. Mr. Castleman was born on April 6, 1933 to the late Robert Alonzo Castleman, Sr. and Thelma A. Myatt. He was preceded in death by his first wife, Catherine Burrus Castleman, siblings Robert Alonzo Castleman, Jr. (Jacqueline), James Albert Castleman (Betty), and Nancy Castleman Hiehle (Charles). He is survived by his daughter Catherine Lynne Castleman Maybank (David) of Charleston, SC, his son, William Dalton Castleman, Jr. of Nasville, Tennessee, and four loving grandchildren David Maybank IV, Catherine Byron Castleman Maybank, William Francis Maybank, and John Edward Frampton Maybank III all of Charleston, SC. In his life he enjoyed the love and company of his many nieces and nephews including their spouses and children. He is also survived by his second wife Elizabeth Turnbull Castleman and her daughters Alissa Sherry (Tom) of Austin,TX, and Camille Sherry Small (Lee). A native of Nashville, Bill was affectionately known as “Willie”. He was a graduate of Isaac Litton High School (Class of 1952) where he excelled in football and received a football scholarship to attend Southern Methodist University in Dallas, Texas. He played proudly for the Mustangs along side his friend and football giant Forrest Gregg. Bill graduated from Southern Methodist University in 1956 with a Bachelor of Business Administration. Upon returning to Nashville, he worked as a sales agent for Castleman Construction Company before attending The Cumberland University Law School in Lebanon, Tennessee. There he earned a Bachelor of Laws degree in 1958 and went on to serve in the United States Air Force as a Captain in the Judge Advocate General’s Corps while stationed in Wichita, Kansas. After completing his service, Bill returned to Nashville and began practicing law under the guidance of W. Raymond Denney, of Denney, Lackey, and Chernau. He subsequently became a partner in the firm which became Denney, Lackey, Chernau and Castleman. Later, with his growing real estate work, he formed his own law firm, The Law Offices of William D. Castleman, PC and Castleman Title and Escrow. His law career spanned over 50 years. Bill was a hard working achiever. Professionally, he was a member of the American, Tennessee and Nashville Bar Associations where he served in a variety of leadership roles. He was a member of the Tennessee Trial Lawyers Association. During his career, he represented Columbia Records and many in the Nashville Music Industry. He also enjoyed a parallel career in construction and renovation, developing several residential communities through out the greater Nashville area. In the early 80’s, Bill received an Historic Preservation Award from Mayor Richard Fulton for his pioneering renovation of 219 2nd Avenue North. This principal renovation became a catalyst for the continued restoration of 2nd Avenue North. Among his civic activities, Bill served on the Board of Trustees for Cumberland University and he was a Founder of the Nashville Memorial Hospital. He served as a leader for Mayor Beverly Briley for the Neighborhood Youth Corps/Head Start, Nashville YMCA Youth Leadership, Middle Tennessee Council of the Boy Scouts, the Nashville Chamber of Commerce, the Rotary Club, the Nashville City Club, Hillwood Country Club, just to name a few. Bill’s avocations were golfing, boating, hunting and anything related to football. Of all his accolades, he gained no greater satisfaction than defending those who could not defend themselves. He derived great fulfillment in giving help to anyone in need. He never met a stranger and all those in his presence were important to him. At various times during his life, he was a member of the Madison Church of Christ, City Road Chapel Methodist Church, Belle Meade Methodist Church and Brentwood Methodist Church. A private funeral will be held at Woodlawn Memorial Gardens, 660 Thompson Lane, Nashville, TN on Tuesday, June 16, 2020. The Reverend Carol Cavin-Dillon will officiate. Donations in his memory may be made to West End United Methodist Church, 2200 West End Ave., Nashville, TN 37203 or to a charity of your choice. Arrangements by Phillips-Robinson Funeral Home, (615) 262-3312.

William Dalton Castleman of Nashville, TN age 87 passed away on June 11, 2020. Mr. Castleman was born on April 6, 1933 to the late Robert Alonzo Castleman, Sr. and Thelma A. Myatt. He was preceded in death by his first wife, Catherine Burrus... View Obituary & Service Information

The family of William Dalton Castleman created this Life Tributes page to make it easy to share your memories.

Send flowers to the Castleman family.