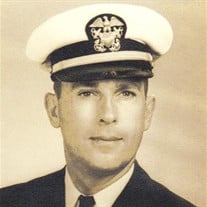 Commander William R. Bryant “Bill” 1928-2019 Commander William R. Bryant “Bill”, son of the late Barney Brundage and Olive Raye Bryant, was born July 30, 1928 in Topeka, Kansas. He was united in holy matrimony to Bonnie Jean Smith, July 1, 1951; she preceded him in death December 30, 2001. He is survived by his son, William Bernard Bryant and daughter-in-law, Karla Bryant, grandchildren, Austin Gammon and Calvin Gammon, nephew, Barney Bryant and wife, Sheila and son Conner. Bill always spoke very fondly of his military life and his 32 years of adventures. One day, several years ago, he wrote a summary of his childhood through his Navy retirement. He told us that he wouldn’t have changed anything about his life. He enjoyed the military. We would like to share HIS story with you: I was born in Stormont Hospital in Topeka, Kansas on July 30, 1928. I lived in Topeka with my parents and brother, Barney Bryant. In 1943 we moved to Silver City, New Mexico where I started high school. Their next move was to Los Angeles, California where I attended Belmont High School. At the completion of my Junior Year, we moved back to Topeka, Kansas where I graduated from high school in May 1946. I enlisted in the Navy June 29, 1946. Upon finishing boot camp, I was sent to the Navy Electronics School located on Treasure Island. A few months into my school year, the building was destroyed by fire. The class was moved to Monterey, California and continued his classes. During this time, I applied for a “Flying Midshipmen” program and was accepted. I was sent to attend a two-year college program at Washburn College. This is where I met by wife-to-be, Bonnie Jean Smith. After my two-year college, I reported to Pensacola, Florida, June 29, 1949, for flight training. Upon completion of flight school, I was sent to Whiting Field for basic flight training. I was trained in SNJ single-engine aircraft, and I soloed at the end of this phase of flight training. Advanced stages were taught at Corry Station, Saufley Field where we practiced carrier landings at an outlying field. I made six carrier landings and takeoffs on USS Bennington. Next stop was Corpus Christi, Texas for advanced flight training in PBM, twin engine seaplanes. Graduating from training, I was sent to San Diego, California for operational anti-submarine training, after which I joined a PBM squadron. When I finished training, I married Bonnie Jean Smith. Bob and Ruth Stephan stood up for us. We began a lifelong friendship with the Stephans. Three months after our wedding, I was deployed to Iwakuni, Japan. We were flying missions out of Iwakuni, covering the ocean spaces between China and North Vietnam. They were all night flights of 11 and 12 hours. The temperatures were around minus 30 degrees below zero, and the PBM had no insultation. At the end of the tour, we left our plane in Iwakuni as a spare for the incoming squadron, and I flew home with crew 7, which happened to be Bob Stephan’s crew. (best man at our wedding) The next assignment was back in the US in San Diego. Entered another training period and next deployment was to the Philippines, where we flew night missions between China and Taiwan. After six months, I returned to San Diego and became an instructor for P5Ms. From there I was sent back to Corpus Christi as an instructor in the old PBMs. Next was ground school where I was an instructor and taught aerology, navigation, instrument rules, and technical subjects to single-engine student pilots. During the time above, we had two sons, Robert Cullen Bryant and William Bernard Bryant. In 1957 we went to Monterey, California for USN Line School. This ten-month series of naval courses completed by naval education. In June 1958 I was sent to the Electronics school in Memphis, Tennessee as an officer, for further assignment as Electronics officer in VS-23, an ASW squadron based on Long Beach, CA. After learning the idiosyncrasies of the S2F aircraft, I carrier qualified aboard USS Bennington in April 1959. I had 10 landings and 10 catapult shots. In June 1959 we deployed on USS Yorktown for a 10-month cruise in the Pacific, primarily in and around Japan. After a second Pacific tour on Yorktown in January 1963, I was assigned to NAS Key West as Electronic officer. In July 1964 I returned to US Naval Post Graduate School where I earned my BS degree. In July 1966, I was sent for technical training in catapult/arresting gear used on aircraft carriers. Upon completion, I reported to USS Bennington as Assistant Air Officer; and later Air Officer of the USS Bennington. After a Pacific tour, in support of Vietnam operations, I returned to Long Beach. I then moved to Monterey for two years to earn my master’s degree in computer system management. Then we moved to the Bureau of Naval Personnel, as project coordinator for their computer system in Arlington, Virginia in 1969, transferring to Pensacola, Florida in 1973 and retired in 1977. After retirement, Bonnie and I volunteered at different outreach programs around Pensacola such as serving meals for AIDS patients and lobbying to change Florida Laws regarding drinking and driving. The open container law was enacted due to our efforts. William R. Bryant was a kind and caring man who brightened people’s lives with his optimistic and positive personality. He will be greatly missed. Memorial contributions may be made to the Naval Aviation Museum Foundation, Pensacola, Florida

The family of William Bryant created this Life Tributes page to make it easy to share your memories.

Send flowers to the Bryant family.