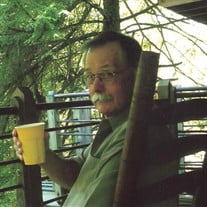 William Dwight Dozier “Bill”, 74, of Lebanon, Tennessee, passed away on May 2, 2019 in Nashville, Tennessee. He was surrounded by family. He was a member of West Haven Baptist Church in Lebanon, Tennessee. Bill was born to the late Jesse Emmett Dozier and Lenore Elizabeth Grasse Dozier on January 22, 1945 in Nashville, Tennessee. He grew up in East Nashville known as Dwight, but later known as Bill to his co-workers and friends. He graduated 1963 from Peabody Demonstration School. Bill worked as a firefighter from 1979-2007. After 28 years of service, he retired as Captain from Metro Nashville Fire Department in 2007. He enjoyed spending time outdoors in the Great Smoky Mountains where he shared many fond memories with his family. In 1999 he fulfilled a longtime dream moving to a 14-acre farm in Lebanon, Tennessee. There he enjoyed raising horses, harvesting vegetables and riding ATVs with his family on the property. He loved working the farm atop his John Deere tractor. Bill met Marilyn Walker in 1981. They were married on February 27, 1982 in Nashville, Tennessee. He is survived by wife, Marilyn, brother, Emmett Dozier, sister, Donna Dozier Grady, children, Brian and Michael Dozier, grandchildren, Austin, Dylan, Harrison, Kendall and Katelyn Dozier. The family has entrusted Phillips and Robinson Funeral Home with the arrangements. A Visitation is scheduled for Friday, May 10th, from 12:00 PM to 2:00 PM at 2707 Gallatin Pike, Nashville, TN 37216. A service will follow at 2:00 PM. Jonathan Richerson will officiate the ceremony. In lieu of flowers, donations may be made to the American Heart Association. To share condolences online, visit https://www.facebook.com/marilyn.dozier.73

William Dwight Dozier &#8220;Bill&#8221;, 74, of Lebanon, Tennessee, passed away on May 2, 2019 in Nashville, Tennessee. He was surrounded by family. He was a member of West Haven Baptist Church in Lebanon, Tennessee. Bill was born to the... View Obituary & Service Information

The family of William "Bill" Dwight Dozier created this Life Tributes page to make it easy to share your memories.

Send flowers to the Dozier family.