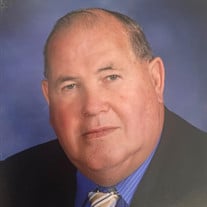 William "Bill" Forrest Bailey, age 78, passed away December 8, 2020. Bill grew up in East Nashville and after leaving East High School in the 9th grade he began working at Boone’s Wrecker Service and Davis’s Wrecker Service in East Nashville. Ever since he was a young man, he always wanted to own Robb Robinson’s Texaco Gas Station at 11th & Woodland (5 Points). In 1968, with no money, no collateral except his word, and a midnight job at Jersey Farms Milk Company, Mr. Robinson gave him the opportunity and took a chance on him. He would go to Jersey Farms at 10pm, deliver milk all night long and then go to the Texaco in the morning and work all day. Get shower and couple hours sleep and do it again. He was determined to uphold his end of the Hand Shake. A new wife and baby son was a priority as well but his word was the only thing he had to give and he couldn’t mess it up. After buying his first wrecker in 1972 he grew Bailey’s Wrecker Service to one of the largest, most successful wrecker services in Nashville with over 25 trucks and 500 commercial accounts. He always stayed humble about his success, stuck to his word and gave back to his community constantly. For years he sponsored youth sports leagues at Shelby Park, Madison Little League, Goodlettsville Little League, Schools, Metro Police Department and helped many families with food, money, Christmas Presents and anything else they may need. He invested in rental property over the years and enjoyed helping others. He would buy a house with the intention of helping them more so than money in his pocket. He continued to drive a wrecker on the midnight shift until 2010 when he sold Bailey’s Wrecker to a friend. He worked every Christmas and Thanksgiving to let the employees be with their families because that’s what you do. He stayed true to his word and humbleness until the day he passed away. If you were a longtime Nashville resident, you had to have known the man. East Nashville lost a giant figure, but his legacy lives on through his family. Bill was a member of Riverwood Church of Christ. He will be missed by all who knew him. Preceded in death by his brother, Paul A. Bailey. He is survived by his wife, Brenda Bailey; son, William “Randy” Bailey (Melanie); grandchildren, Tanner Bailey and Kayla Bailey; sister, Nancy Scruggs; brother, Edward L. Bailey (Ushi). Graveside services will be conducted Tuesday, Dec. 15th at 1pm at Forest Lawn Memorial Gardens, Brother Dustin Welch officiating. Family and friends will serve as Pallbearers. In lieu of flowers please make donations to box55.org, riverwoodchurchofchrist.org, or your favorite charity. Phillips-Robinson Funeral Home, (615)262-3312.

The family of William "Bill" Forrest Bailey created this Life Tributes page to make it easy to share your memories.

Send flowers to the Bailey family.