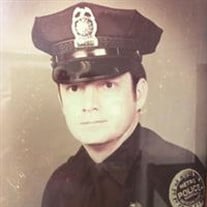 Sergeant (Ret.) William “Bill” Bandy passed away peacefully, surrounded by his family at Alive Hospice after a short battle with Leukemia on July 22, 2021. Bill lived 79 years, full of adventure and service to his community and country. Bill was born in Albany, KY on February 7, 1942. Proudly, born the third of seven children to Walker and Eva where they grew tobacco and raised pigs. He, his brothers, and sisters grew up working the farm. His early adulthood found him in the Marine Corps and Air Force serving in Taiwan, Cuba and the Philippine Islands. In 1971, he joined the Nashville Metropolitan Police Department where he retired after 26 years. Bill was well regarded for his passion and friendships made in the automobile business. In 1973, he opened Bandy Motors in Madison, TN, which he owned and operated right up to his last few days. He was most proud of his grandchildren and very much looking forward to the arrival of his great-grandchild this upcoming February. Bill was preceded in death by his parents, his son, Jeffrey Page Bandy; brothers, Richard Bandy and David Bandy, and sister, Martha Sue Cross. He is survived by his children, Rod (Melissa) Bandy, Sid (Angela) Bandy, and Cindy Garcia-Toler; brother, Robert (Linda) Bandy, sisters, Mary Elizabeth Huddleston and Margaret (Wayne) Morris; grandchildren, Zak Bandy, Ezekiel (Emily) Bandy, Brooklyn (Brandon) Lipps, Blair Bandy, Teryna Toler, and Kaitlyn Toler; great-grandchildren, Hudson Parker, Brenyn Parker, and Mila Marie Alexander; and the mother of his sons, Patricia Bandy. A celebration tribute will be conducted from 4:00 p.m. until 8:00 p.m., Saturday, August 7, 2021 at the Epic Event Centre, 392 West Main Street, Gallatin, TN 37066. In lieu of flowers, the family requests that memorial donations be made to the Leukemia & Lymphoma Society by visiting www.lls.org/

Sergeant (Ret.) William &#8220;Bill&#8221; Bandy passed away peacefully, surrounded by his family at Alive Hospice after a short battle with Leukemia on July 22, 2021. Bill lived 79 years, full of adventure and service to his community and country.... View Obituary & Service Information

The family of William Virgil Bandy created this Life Tributes page to make it easy to share your memories.

Send flowers to the Bandy family.