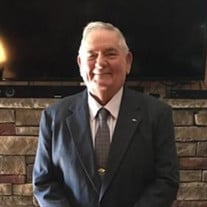 Walter Lee Toney went home to be with his Savior on May 19, 2022. He was born on August 23, 1941 in Nashville, TN. Walter graduated from Central High School in 1959 and attended Tennessee Tech the following semester, but due to his father’s sudden passing, he returned home. He enlisted in the Marine Corps where he fought in Vietnam, assisting in the construction of helicopter pads for military supply drops. After returning from his year deployment, he was employed by the State of Tennessee as a Tennessee State Trooper for several years. Ending his tenure with the state, he was employed at CSX Railroad as a police detective where he was promoted to superintendent in his department. He retired from the railroad after 35 years of service. Walter was a 32nd degree Mason and a Shriner for many years. After his retirement he became a member of the Al Menah Shriners where he served as a van driver for transporting patients to the Shriner’s Children Hospitals in Kentucky and Ohio. He was also a member of the Motor Corp where he competed in motorcycle competitions with other Shrine groups state-wide and nation-wide. He was also an honorary member of the Provost Guard. Walter raised a loving and faithful family. When he was in his mid twenties, he accepted Christ in the presence of his 4 year old daughter. His strong Christian values and devotion to his faith in God led his daughter to the Lord and a man of faith. Walter’s daughter and son-in-law continue to foster those strong beliefs in their daughter. He and his wife were active in supporting the FOP Boys Camp for underprivileged children, serving ice cream each summer. He loved fishing, camping, and traveling. He loved being around people and making them laugh. He was a giving person who helped in any way he could. Walter was the most loyal and noblest man his family has known. He was a loving devoted husband, and extraordinary father, and an impactful, comical Paw Paw. Preceded in death by his parents, Charles and Josephine Toney; his wife of 37 years, Faye Peery Toney. Survived by his wife of 12 years, Eva Viola McNaney Toney; daughter, Lisa Toney Whitley; son-in-law, Randy Whitley; granddaughter, Hannah Grace Whitley; step-daughter, Patti McNaney (Robert-Leebo) Goodman; grandson, Blake (Brittany) Goodman; great-grandchildren, Emma and Addison Adcox, and Easton Goodman. The family would like to express their deepest gratitude to the staff at AHC Senior Living-Rehibilitation of Mt. Juliet for their wonderful care for Walter and his family, and also to Amedisys Hospice. Visitation at Phillips-Robinson Hadley Chapel Tuesday from 4-8pm with Masonic Service at 7pm, and Wednesday from 11am until the time of service at 1pm. Interment will follow at Woodlawn Memorial Park. Family and friends will serve as Pallbearers.

Walter Lee Toney went home to be with his Savior on May 19, 2022. He was born on August 23, 1941 in Nashville, TN. Walter graduated from Central High School in 1959 and attended Tennessee Tech the following semester, but due to his father&#8217;s... View Obituary & Service Information

The family of Walter Lee Toney created this Life Tributes page to make it easy to share your memories.

Send flowers to the Toney family.