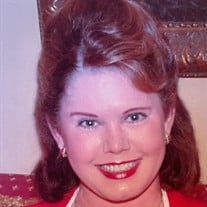 Valerie Norman Sanders, 66, of Nashville, TN passed away Saturday morning, December 11, 2021, at St. Thomas Hospital West. Valerie was born on January 26, 1955, in Nashville. She was predeceased by her parents, Jack Norman, Jr. and Duina Zacchini Norman and her sister, Pia Norman Stratton. She is survived by her husband, John B. Sanders; her identical twin sister, Melody Norman Vela (Jorge); her stepchildren, John Scott Sanders (Michelle) and Rebecca Sanders Champney (Dennis); her five nephews, David Hardin, John Hardin (Stephanie), Octavio Vela, Jorge Vela, II, and Mario Jack Vela; her niece, Delia Hardin Darst (David); her stepmother, Barbara Norman: her four-legged furry friend, Winston Churchill (Mayor of Abbotsford); and her two horses, Big Red and Gentleman Pete. Valerie, also known as “one of the twins” or “Val”, lived a fulfilling and happy life. She loved being around family and friends. Although she had no children of her own, she considered herself a second mom to her niece and five nephews and a surrogate grandmother to her six great-nieces and nephews. Fondly known as “Aunt Val”, a title that carried a whole lot of love among her brood, she guarded and helped raise them as if they were her own. Valerie graduated from John Overton High School in 1971 and received her RN from Belmont College in 1977. She worked at West Side Hospital until joining Case Management Consultants, where she worked as a case manager until her retirement in 2017. Valerie proudly joined the Tennessee Air National Guard, after being recruited by her father, Lieutenant Colonel Jack Norman, Jr., into his aeromedical squadron. Captain Valerie Norman served with her unit in Operation Desert Storm. While serving in the guard Valerie met the love of her life, Johnny Bruce Sanders. They married on September 23, 1995. They traveled the world, entertained often and enjoyed life together with family and friends for over 26 years. Valerie was an avid horsewoman. She often said some of her happiest times were spent in the saddle or just hanging out among her horses at the barn. Always ready for a good time, Valerie leaves behind a legacy of wonderful memories filled with a slew of antics, laughter and joy. She was a bundle of fun and a most beloved sister, wife, aunt and friend. A kindred soul who is dancing in heaven with her sister Pia, Val will live in our hearts and fondest memories forever. Visitation will be held at Phillips-Robinson Funeral Home, 2707 Gallatin Road, Nashville, TN 37216, on Friday, December 17, 2021, from 12pm until the time of service at 2pm. A short graveside ceremony will be held at the Middle Tennessee State Veterans Cemetery on Monday, December 20, 2021, at 11am. In lieu of flowers please make donations to the animal rescue service of your choice.

The family of Valerie Norman Sanders created this Life Tributes page to make it easy to share your memories.

Send flowers to the Sanders family.