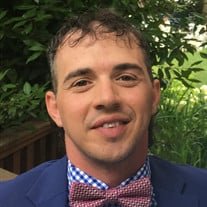 Thomas Nathan (Nate) Loftis, Jr., age 38 of Nashville, passed away Monday, August 12, 2019. He is survived by his parents, Tom Loftis and Babs Freeman-Loftis, siblings Maggie Loftis (Daryl Cooley) and Matt Loftis (Kim), nephew Remy, his beloved dog Locker, his best friend Jeremiah Merriott, and a large and extended constellation of family and friends. He is preceded in death by his grandparents, Ed and Bunny Loftis and Ginny and Bob Freeman. He lived life with a sense of adventure and infectious joy while traveling the world with his work. Nate was a generous, loving and loyal son, brother, cousin, uncle, nephew and friend to all who knew him. Nate graduated from Franklin Road Academy in 2000, where he was a member of the wrestling, football and soccer teams. He went on to work in the music industry, working his way up from site manager at Dancin’ in the District at the age of 17 to on-the-road sponsorship manager at MAC Presents to a highly skilled automation programmer, technician and crew chief with ShowRig. He assisted in building and operating the many moving sets that carried artists and other automated stage features for global tours. He was especially proud of his career with Kenny Chesney and other artists including Carrie Underwood, John Mayer, Keith Urban, Martina McBride, Paul McCartney, Aerosmith, Tim McGraw and Faith Hill, Lil Wayne, Blink 182, and Kendrick Lamar. He developed a reputation for being a leader in his field, and “juggernaut of the cable management game.” While touring with the Trans-Siberian Orchestra tour for numerous years, his family would rendezvous in the city where they were performing during the Christmas holidays to be with Nate. Nate had a love of the outdoors and hiking, particularly the 2,200-mile Appalachian Trail. On March 31, 2018, he and his cousin, Harvey Freeman, embarked on what was to be an epic traverse of the entire trail. On the anniversary of his trail launch, Nate shared on Facebook, “Last March I started my journey to walk from Georgia to Maine, 2200 miles. I ended up leaving the Appalachian Trail after 786.6 miles in Glasgow, Virginia. Even though I wasn’t successful in reaching Maine, my hike was hardly a failure. I have lots of happy memories and made many lifelong friends.” Nate’s hiking family became known as the “Rochers.” This summer, El Chapo (Nate’s trail name) and other members of the Rocher trail family returned to the trail to serve up some “trail magic” for other hikers making their way. He was a trail angel in that regard. Nate was an avid Tennessee Titan’s fan and was inducted into the Inaugural Class of the Tennessee Titans Hall of Fans and was recognized at Nissan Stadium with a larger-than-life-sized banner. A celebration of life will be held on Friday, August 16 from 5:00 – 8:00pm in a Suite at the Titan’s Nissan stadium. Parking is available in Lot H. All who knew and loved Nate are welcome to join us as we honor and celebrate his beautiful life. In lieu of flowers, the family requests that donations be made in Nate’s memory to Still Waters Program/Cumberland Heights or the Appalachian Trail Conservancy.

The family of Thomas Nathan 'Nate' Loftis Jr. created this Life Tributes page to make it easy to share your memories.

Send flowers to the Loftis family.