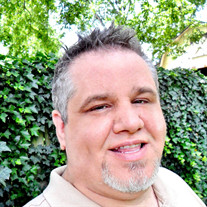 Terry Allen DeMars Obituary Terry Allen DeMars was born August 26, 1973 in Ardmore, Oklahoma and passed away in his Nashville, TN home on August 5, 2019. He was 45 years old. Preceded in death by his mother, Cathy Byers Faulkenberry, Terry leaves behind his lifelong partner, Aunts, Uncles, many cousins, and countless members of chosen family and friends who will miss him until they are all together again. Terry moved to Nashville in 1999 with his longtime partner Lenn Prewitt, and together they celebrated their commitment on December 24, 2001. During his time in Nashville, Terry became an advocate and a friend to many. As an artist, a social media influencer, and as an advocate for the homeless, he impacted countless lives. His personal and lifelong passion for art became a pathway to community service. Terry attended the Art Institute of Nashville and studied Media Arts and Animation. He used his talents to serve as the Director of Visual Arts for Dear Music. As an art teacher at the Hadley Community Center, he touched many lives. He founded Local Heart as well as Arts for Equality. As the founder of these organizations, he amplified the voices of local queer and nonbinary and allied artists. He helped to raise thousands of dollars with a mission to use art to benefit local community nonprofits like Oasis Center, OutCentral, Tennessee Equality Project, the Contributer, Launch Pad, and Room In the Inn. As Out and About’s 2017 Favorite Artist of the Year, he donated numerous works of art to various causes and charities. His prolific body of work will bring comfort to the many people who loved him for many years to come. He was a community builder and organizer, with a heart of service who lived every day with passion and humor. With a heart for the disenfranchised, Terry created Gay and Lesbian Nashville and LGBTQIA Nashville on Facebook. His goal was to provide people with access to a sense of community who might be experiencing physical or economic barriers. These groups have ballooned in size over the last seven years and have a total membership of over 7,000. He will be deeply missed by a community of people who, because of his efforts, remain connected and informed about their Nashville LGBT community. Serving not just in the social media and organizational realm, he also served on the Board of Directors for OutCentral 2017-2018. Terry was particularly passionate about the homeless and dispossessed. He had compassion for people, no matter their situation. He organized multiple “Feed Tent City” missions that raised thousands of dollars in supplies and survival gear for our local homeless population. Terry is more than a list of accomplishments, although the list of accomplishments is long. He is a collection of beloved memories held by countless people. He is the hilarious stories and the belly laughs that we have when we think of his wicked sense of humor. He never denied himself or anyone else any pleasure. His life cannot be measured by the number of years he lived, but by the sheer magnitude of life that he embodied in those years. “I believe that art should radiate emotion and transport you to another place or state of mind. I believe that inspiration can be found in just about anything if you look hard enough.” Terry Allen DeMars, friend, champion, artist 1973-2019 Please donate to cover the costs of services and arrangements.

The family of Terry Allen DeMars created this Life Tributes page to make it easy to share your memories.

Send flowers to the DeMars family.