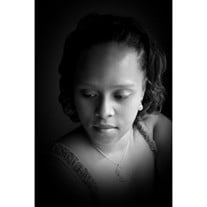 Tashelle Nikita Sherice Vaughn was born at Nashville's Baptist Hospital on June 14, 1990 to the parentage of Jerry Vaughn Sr. and Kimberly Wilson Vaughn. She was a humorous child and had intelligence far beyond her years. At a very early age she developed a nurturing spirit about her and an intense love for both Cats and Dogs and was always empathetic to their needs often saving a stray from possible harm. These attributes developed into her being a devoted friend that would help when possible, loving family member and a doting Mom to her daughter Kameria. She attended Hunters Lane High School and was a recent graduate of Nashville College of Medical Careers obtaining her certification in Medical Assisting. On Friday, January 20, 2012 the beautiful spirit of Tashelle Vaughn left it's earthly presence and transitioned to join her infant daughter, Jaslyn Stewart and a grandfather, James Ray Vaughn Sr. who preceded her in this journey to her Saviours' heavenly home. She leaves to cherish fond memories her daughter, Kameria Taylor, parents, Kimberly (Maesha) Guyton of Beaverton, OR and Jerry (Anita) Vaughn Sr. of Nashville; three brothers, Anthony of Nashville, TN and Terry and Jerry Vaughn Jr. of Dayton, OH; two sisters, Nikki Vaughn of Dayton, OH and Briea Pillow of Nashville, TN; Grandparents, James (Doris) Selmon of Dayton, Ohio; Wathenia Vaughn of Columbus, OH and Michael (Doris) Lewis Sr. of Nashville, TN. Numerous family and friends including a special aunt, Tiffany Selmon and cousin Tyrinn Poole. Visitation will be held at the PHILLIPS-ROBINSON FUNERAL HOME, 2707 Gallatin Road, Nashville, TN on Friday, January 27, 2012 from 12PM until the time of her service at 2PM. Interment will follow in the Greenwood Cemetery North. Your New Home You filled my life with so much love and now your home in heaven above Your precious gift, a little girl to brighten up your whole world Rest my child, she'll be just fine I'll give her love with you in mind When you look down you will see that you live on in her and in me. Fly home my child, spread your wings Enjoy the song the angels sing Enjoy the clouds on which you will rest He called you home cause you're the best. With all my love, Mom

Tashelle Nikita Sherice Vaughn was born at Nashville's Baptist Hospital on June 14, 1990 to the parentage of Jerry Vaughn Sr. and Kimberly Wilson Vaughn. She was a humorous child and had intelligence far beyond her years. At a very early age... View Obituary & Service Information

The family of Tashelle Nikita Sherice Vaughn created this Life Tributes page to make it easy to share your memories.

Send flowers to the Vaughn family.