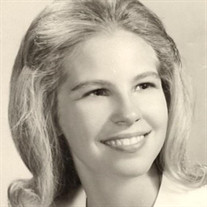 Sue-Ellen Cunliffe, Age 74, of Hermitage, TN, passed away on February 16, 2022. Preceded in death by her father, Leonard Boltz and son-in-law, Barry Burgess. She is survived by her mother, Suzanne Boltz; daughters, Bonnie (Clark) Lamping and Kimberly Cunliffe; grandchildren, Ryan and Jack Lamping and Ella Burgess; siblings, Leonard Boltz Jr. and Kimberley Gilroy; and numerous extended family. Sue-Ellen was the first of three children born Oct. 27, 1947 to Suzanne and Leonard Boltz in Chicago, Illinois. The family moved out of the city to Lincolnshire in 1960 where Sue-Ellen attended Ela-Vernon High School. Her love of music drew her to the school Choir where she excelled and made many of her friends. After graduation she attended Dental Hygienist school and worked briefly in the field, but ultimately decided to attend College and earn a degree. She attended Lincoln Junior College in Illinois where she earned a two year degree and met her husband Keith Cunliffe. The two were married in Deerfield, Illinois in December of 1968 and initially lived in Albany, Georgia while Kieth served honorably in the U.S. Navy during the Vietnam war. They were blessed with two daughters, Bonnie Sue and Kimberly Ellen. After Keith’s release from the service they moved back to the Chicago area to be closer to family as this was always number one in Sue-Ellen's heart. During this time, she converted to Catholicism. The tenets of the Catholic church resonated with her, and she decided to raise her children in this faith. She made sacrifices in order for her girls to attend Catholic Schools. Job opportunities a few years later lead to another move to Nashville, Tennessee. Sue-Ellen was a homemaker for many years, until she returned to work and held various positions including the Better Business Bureau and a Unit Clerk for General Hospital. Sue-Ellen had a deep desire for continued education, so she courageously enrolled in Belmont University and earned a Bachelor of Science in Social Work in 1993. She was very proud of her achievement, and worked in the field at Nashville Crisis Intervention Hotline. Sue-Ellen loved music, and animals and always had both nearby. Her animals were a big part of her life and she loved them dearly. She was also an insatiable reader and loved immersing herself in a good book. She was fascinated in her family history and spent much time researching the family tree. Her religious convictions deepened as she grew older and there was always a bible within reach of her bed. Her life became difficult as her knees weakened and her reduced mobility eventually caused more health problems to arise. She loved family and called her 97 year old mother daily. Sue-Ellen spent the last several years in a nursing home close to her youngest daughter, who helped care for her and provided much comfort and happiness. She passed away peacefully shortly after telling her daughter how very much she loved her. Like many of us, she had her struggles with life, but she will be missed by all that knew her. May God rest her soul. Visitation will be at Phillips-Robinson Hadley Chapel, 1700 Hadley Ave. in Old Hickory, TN, on Friday, February 25, from 10:30am until the time of our service at 12pm, Father Ed Steiner officiating.

Sue-Ellen Cunliffe, Age 74, of Hermitage, TN, passed away on February 16, 2022. Preceded in death by her father, Leonard Boltz and son-in-law, Barry Burgess. She is survived by her mother, Suzanne Boltz; daughters, Bonnie (Clark) Lamping and... View Obituary & Service Information

The family of Sue-Ellen Cunliffe created this Life Tributes page to make it easy to share your memories.

Send flowers to the Cunliffe family.