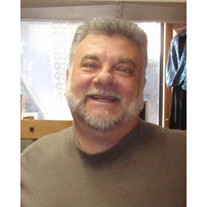 Steven P. D'Ambrosio of White House, TN, formerly of Vestal and Chenango Forks, NY, passed away on December 12, 2016 at Centennial Hospital, TN at the age of 64. Steve was born to Robert and Susan D'Ambrosio in London, England on December 9, 1952. He was predeceased by his father Robert. Steven is survived by his mother Susan; sister Terri D'Ambrosio (Wayne Mattheson); children Kurt (Roberta) D'Ambrosio, Anita (Derek) Joncas, Kristy (Matthew) Surace; his 15 grandchildren, Victoria, Caitlyn, Anthony, Megan, Nathan, Jason, Rachel, Mikayla, Dominic, Gabriella, Cameron, Maya, Lyndsie, Matthew and Connor; as well as his nephew Brandon and niece Kira. Steve Graduated from Vestal Central High School and attended Nassau Community College on Long Island. He spent most of his working career with Universal Instruments in NY and AL and lastly with Teledyne in TN. Steve's passion for singing began with the choir at St. Mark's Episcopal Church in Chenango Bridge, NY. Soon-after, Steve joined the Barbershop Harmony Society in Binghamton NY. When he moved with Universal Instruments to Alabama, he continued his singing with the Rocket City Chorus. His relocation to Tennessee saw him sing with both the Southern Splendor Chorus in Athens and the Music City Chorus in Nashville, Tennessee. One of the proudest moments of his singing career occurred in 2015. At the International Barbershop Convention in Pittsburgh, Pennsylvania: the Nashville City Chorus won fifth place in the International competition. Whenever his health turned on him, Steve always found peace, strength and harmony on the risers with his Barbershop brothers. Steve loved and was loved by everyone he met and will be greatly missed by all. He touched everyone with his genuine kindness and laughter. The family would like to express their appreciation and gratitude to Steve's friend Tommy Mitchell for all of the care, help and support, unselfishly given to Steve. A celebration of life to be held at 2:00 PM on January 7, 2017 at the Knights of Columbus, located at 2300 Knights of Columbus Blvd, Nashville, TN 37217. A memorial service in Binghamton, NY, will be announced at a later date. Donations can be made to the Harmony Foundation of the Barbershop Harmony Society, 110 7th Ave, North Nashville, TN 37203-3704 or at www.barbershop.org. Arrangements by the Phillips-Robinson Funeral Home, 2707 Gallatin Pike, Nashville, TN. Our family serving yours since 1929.

Steven P. D'Ambrosio of White House, TN, formerly of Vestal and Chenango Forks, NY, passed away on December 12, 2016 at Centennial Hospital, TN at the age of 64. Steve was born to Robert and Susan D'Ambrosio in London, England on December 9,... View Obituary & Service Information

The family of Steven Paul D'Ambrosio created this Life Tributes page to make it easy to share your memories.

Send flowers to the D'Ambrosio family.