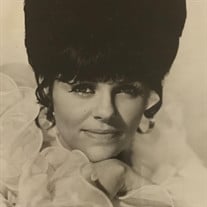 If you knew Shirley Lee Lord (aka Shirley Spears, Shirley Adams, & Shirley Woods), you will be surprised to know that she passed away at the age 82, in Nashville, on August 22, 2021. We know that you would be surprised because Shirley was a fighter and a survivor who loved life, her family, her music, and hot chicken. She left home at fifteen and never looked back. Living a life worthy of Hollywood or a good country song, she moved about the country singing and writing songs, rubbing shoulders and sharing the stage with the stars of the day. She played the Ryman, the Exit-In, and honkytonks from California to Greenland. Connie Smith recorded Shirley’s song "Cry, Cry, Cry" in 1968 and the song reached #20 on the Billboard Hot Country Singles Chart. The year before, Jean Shepard recorded Coming or Going. In the winter of 1972 Shirley’s label released her version “Sunday Morning We’ll Be Singing” written by Dallas Frazier and Doodle Owens. Listen to those songs, the sass, the irony, and the edge from a female voice was years before its time but her brand of country paved the way for the female artists in today’s country music. Shirley could argue with the ferocity of a lion and make you laugh until you cried. She was always tougher than the hard times and generous to a fault. Shirley loved her dogs and cats and everybody else’s dogs and cats. Shirley taught her children to dream big, stand up for themselves, and be self-sufficient. In all of her days, she never lost faith in herself or the Lord. Shirley was a true talent and inspiration. In the end, she always did the best she could with what she had. Looking back, 82 trips around the sun spent giving it your best and living your life like a song is something to celebrate. Preceded in death by her parents, Draper and Mildred Overstreet; son, Frank Potts; brother, David Overstreet. She is survived by her children, Angel Burrows, Dawn Oliphant, Terry Adams, and Robby Spears; grandchildren, Craig Burrows, Tiffany Burks, Taylor Kulaszewski, Austin Spears, Bruce Sparks, Ashley Lynn, and Taylor Oliphant; great-grandchildren, Brylee Burks, Shelby Burks, Parker Burks, and Remington Burks; sister, Peggy Bass; nieces, Gail Champion, Myra Allen, and Kim Webb. Visitation will be at Phillips-Robinson Funeral Home, 2707 Gallatin Rd. in Nashville, TN, on Friday, August 27, 2021, from 10am-12pm. The service will be at 12pm in our chapel with Rev. Hubert Cunningham officiating. Interment will be immediately following the service in the Meadow Ridge section at Spring Hill Cemetery. In lieu of flowers, we ask that you donate in Shirley’s honor to the Sweet Relief Musicians Fund which provides financial assistance to all types of career musicians and music industry workers who are struggling to make ends meet while facing illness, disability, or age-related problems at https://www.sweetrelief.org/

If you knew Shirley Lee Lord (aka Shirley Spears, Shirley Adams, & Shirley Woods), you will be surprised to know that she passed away at the age 82, in Nashville, on August 22, 2021. We know that you would be surprised because Shirley was a... View Obituary & Service Information

The family of Shirley Lee Lord created this Life Tributes page to make it easy to share your memories.

Send flowers to the Lord family.