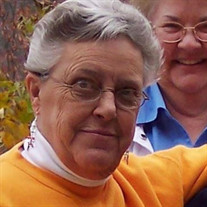 Sandra Lou Sadler Freeze January 4, 1945 - January 31, 2021 Preceded in death by her father, John Sadler; her mother, Lulu Key Sadler; her brothers, Bill, Joe, Don, and Ray; and her sister, Jane Sadler Crimm. Survived by her stepsons, Jimmie and Jeff Freeze; nieces and nephews, Debra Sadler, Joe Sadler, Joe Hotzel, Jay Voorhees, Bill Sadler, Stephen Sadler, Ray Sadler, Tasha Berman, Johnny Sadler, Candy Rumfelt, Terry Sadler, Sydney Walker, Jim Sadler, Donnie Sadler, many, many great-nieces and nephews, and her former husband, Jim Freeze. Sandra (and her sister Jane and brother Ray) were residents at Tennessee Preparatory School, and she was a graduate of Cohn High School in West Nashville. Sandra moved to the Washington D.C. area to be close to her brother and sister and became an employee of the Chesapeake and Potomac Telephone Company, becoming one of the first women to serve in a technical capacity in that company. Sandra also sang in a musical group that played throughout the region, and she was an active softball player for many years. In the 1980’s Sandra returned to the Nashville area and worked in both telecommunications and the chemical industries until her retirement. Sandra lived for many years with her sister Jane and their friend Mitzi Crafton, known affectionately by their families as “The Golden Girls.” Sandra and Jane would eventually move to Smyrna and enjoyed working in their yard and visiting with their neighbors. Upon Jane’s death, Sandra moved to Murfreesboro. Her nephew Jay noted that Sandra “was a big personality, never lacking in opinions, stubborn as can be, but always willing to give you the shirt off her back if you were in need.” Sandra was a dedicated sports fan, supporting the Washington Redskins, the Tennessee Titans, and the University of Tennessee Vols. A memorial service for family and close friends will be scheduled at a later date. In lieu of flowers, financial donations in memory of Sandra’s life should be made to the City Road Chapel United Methodist Church Help Fund by visiting https://onrealm.org/CityRoadChapel/-/give/memorial or sending a donation to the church at 701 Gallatin Pike S., Madison, TN 37115.

The family of Sandra Lou Sadler Freeze created this Life Tributes page to make it easy to share your memories.

Send flowers to the Freeze family.