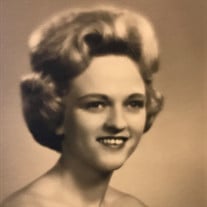 Sandra Richardson Albers, 77, passed away quietly and gracefully, surrounded by her family on Monday, June 17, 2019, in Nashville, TN., at Alive Hospice. Sandra was born on September 4, 1941, in Princeton, Indiana, to Glenn and Marie (Bottom) Richardson. She was their second child. Sandra grew up in Oakland City, Indiana, and graduated from Wood Memorial High School in 1959 at the top of her class. She continued her education at Indiana University where she joined the Zeta Tau Alpha sorority and graduated in 1963 with a Bachelor of Science degree, again at the top of her class, becoming a Physical Therapist. That same year she began her career at Vanderbilt Hospital in Nashville, Tennessee. In 1965, while she was washing the blinds at the apartment she shared with a roommate, she met her husband, John (Jay). He was with a friend who was dating the roommate. John and Sandra married at First General Baptist Church in Oakland City, IN, on March 19, 1966. They settled in Nashville and in May 1967, they welcomed a daughter, Ann, to their family. Sandra and Jay would live in many areas of the country through their life together including Charleston, W. VA, Binghamton, NY, Chesapeake, VA, Evansville, IN and Hendersonville, TN. In 1991, they added Jamie Milan to their family and gained a second daughter and four grand-daughters. Sandra worked in hospitals and schools as a Physical Therapist. It was during her tenure at Core Nursing and Rehab in Evansville, Indiana, that she was the Director of Physical Therapy. She thoroughly enjoyed her job and mentored many physical therapy students and assistants during her career. She was an advocate of Shriner’s Hospital. Sandra loved her family dearly and looked forward to big family gatherings with everyone around. The more, the merrier and the louder, the better, she would say. She loved the beach, the sound of ocean waves, shopping, Thanksgiving, Christmas, birthdays, planning family trips, traveling, and watching her family grow, prosper and succeed. She valued education and encouraged everyone to get a college degree. Sandra is preceded in death by her parents and her brother, Gary Don Richardson. She is survived by her husband John D. Albers, Two daughters; Ann Shike and her husband Brian of Lebanon, TN, and Jamie Milan and her husband Troy of Hendersonville, TN; Four granddaughters: Dr. Ashleigh Kappos-Woods (whom she was very proud of) and her husband Tommy of Indianapolis, IN, Brittany Hogg (whom she loved dearly) and her wife Mikel of Evansville, IN, Courtnie Smith (her favorite) of Hendersonville, TN, and Sydney Breazeale (who made her laugh)of Evansville, IN; Two great-grandchildren, Darius O’Shay Rushing, Jr. (the light of her life) and Amelia Loren Hickey (her little girl), and several dear cousins and friends including Brett Bell of Oakland City, IN, Larry Bottom of Oakland City, IN, Les Bryan of Evansville, IN, Steven Sensmeier of Murfreesboro, TN, Joy Jeffras of Indianapolis, IN and Martha Harper of Hendersonville, TN, who was like a sister to her. The funeral service for Sandra will be held at 10:00am, Saturday, June 22, 2019 at First General Baptist Church in Oakland City, IN. Visitation will be held at 9am until service time. Burial will follow at Montgomery Cemetery in Oakland City, IN. In lieu of flowers, a memorial contribution can be made to Alive Hospice

Sandra Richardson Albers, 77, passed away quietly and gracefully, surrounded by her family on Monday, June 17, 2019, in Nashville, TN., at Alive Hospice. Sandra was born on September 4, 1941, in Princeton, Indiana, to Glenn and Marie (Bottom)... View Obituary & Service Information

The family of Sandra Richardson Albers created this Life Tributes page to make it easy to share your memories.

Send flowers to the Albers family.