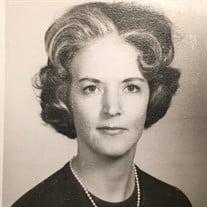 Ruby Joyce MacQuarrie, 86, of Hermitage, Tenn. went to be with our Lord and Savior, November 20th, 2019 at the Blessed Home Care, Gallatin, Tenn. Ruby Joyce MacQuarrie was born, Sept. 14, 1933 at Cypress Inn, Tenn. to the late George Washington Berry and Grace Priscilla Warrington. Ruby Joyce loved her family, deeply. She was the epitome of what it means to be hospitable, both in her own home and wherever she was being cared for. She was a wonderful homemaker, but also enjoyed part time work as a real estate agent. In addition to her parents, she was preceded in death by her husband of 62 years, Jack Colby MacQuarrie, Brothers; Warrington Berry (Ruby), Eugene Berry (Nell), Lorton Berry (Ida Pearl), Charles Berry (Rena,living), Sisters; Audra Sowden (Mel), Essie Berry, and Peggy Grandinetti (George); granddaughter Danielle Nicole MacQuarrie and grandson, James Michael Alley. Survivors include her daughter Marcy Braun, sons, Colby MacQuarrie (Carole), James MacQuarrie(Lillianna) and John MacQuarrie, six grandchildren, six great grandchildren and two great, great grandchildren, nieces and nephews. A celebration of Ruby Joyce's life will be held, privately, with her family. Funeral arrangements by Phillip Robinson Funeral Home The family would like to express their deepest gratitude to the caregivers of Blessed Home, Gallatin, Tenn., as well as Hospice of Middle Tennessee.

The family of Ruby MacQuarrie created this Life Tributes page to make it easy to share your memories.

Ruby Joyce MacQuarrie, 86, of Hermitage, Tenn. went to be with...

Send flowers to the MacQuarrie family.