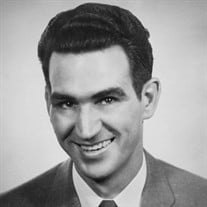 Robert G. Cole of Nashville, Tennessee passed away peacefully last Friday morning, March 6, 2020. Known by family and friends as &#8220;Bob, Bobby, or Daddy Bob,&#8221; he was just shy of reaching his 90th birthday, a milestone that would have... View Obituary & Service Information

The family of Robert G. Cole created this Life Tributes page to make it easy to share your memories.

Send flowers to the Cole family.