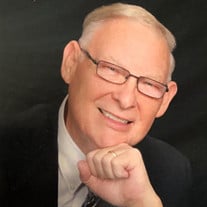 Robert “Bob” Beryl Beck, Sr., age 85, passed away peacefully at home on February 16, 2021. He was born on February 25, 1935 in Dalton, Georgia to Carson and Gladys Beck, and was the youngest of four brothers. He was preceded in death by his parents; his brother, Richard “Dick” L. Beck, Sr.; and his brother, Donald A. Beck. He is survived by his brother, L. Dale Beck; his loving wife, Martha Lucinda Cone Beck; his daughter, Perkie Beck Cannon (James); his sons, Robert Beck, Jr.(Sonia) and Carson “Bill” W. Beck(Pam); his beloved grandchildren, Clare Cannon, Sara Cannon, Meredith Beck and Karl Beck; and numerous nieces and nephews and other relatives. Bob Beck was a man who lived life to the fullest. He loved God, the church, his family and his business. He started working as a newspaper boy for the Tennessean and the Nashville Banner at five years of age and continued through college. He graduated from Howard High School, where he met the love of his life, Martha Lu Cone. He was an outstanding athlete in football, baseball and basketball and attended Vanderbilt University on a baseball and newspaper scholarship. He married Martha Lu after college and they celebrated 63 years of marriage. Bob completed his J.D. from Nashville School of Law and used that knowledge to develop his real estate business, Beck and Beck Realty, which he co-founded with his wife. He was recognized by the Tennessee House of Representatives in 2018 for his meritorious service and leadership for over fifty years to the community as the oldest living active real estate broker in Davidson County. Bob Beck was a member of Dickerson Road Baptist Church. He was baptized at age 9 and has served God through the church and other ministries all of his life. He was known for his spirit of encouragement and generosity, especially to ministers. Bob Beck, “Papa,” is dearly loved and will be greatly missed by his family and by countless people whose lives he has touched. Services are private. Burial will follow on Sunday, February 21, 2021 at 2:00 p.m. at Woodlawn Memorial Park. Memorials may be made in his honor to; Dickerson Road Baptist Church, 3601 Dickerson Pike Nashville, TN 37207 / 615.865.0911 St. Jude’s Children's Hospital, www.stjude.org/donate/donate-to-st-jude.html or Nashville School of Law, https://www.nsl.law/alumni/give-back/

The family of Robert "Bob" Beryl Beck Sr. created this Life Tributes page to make it easy to share your memories.

Send flowers to the Beck family.