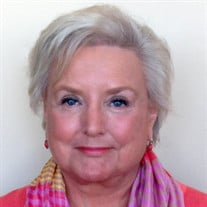 Patsy Smithson Bruce, a musical pioneer and a woman of power, beauty, creativity, elegance, and impeccable taste died on May 16. She was 81. Her unprecedented resume spanned industries, skill sets, and states as she found success in the entertainment industry, event planning, tourism, journalism, activism, and politics. She proudly viewed herself first and foremost as a songwriter and dedicated herself to protecting songwriters’ rights. She co-wrote the No. 1 country standard “Mama, Don’t Let Your Babies Grow Up to Be Cowboys,” as well as “Texas (When I Die),” Tell ‘Em I’ve Gone Crazy,” and “Girls, Women, and Ladies.” She served as president of the Nashville Songwriters Association International in the late seventies and early eighties. In 2017, she and her son Trey Bruce, also a hit songwriter, launched Songbird Tours to educate tourists about the history and importance of songwriters. She was born in Jackson, Tenn., and relished the time she spent living on her grandparents’ farm in Brownsville. While working as a secretary in Nashville, she met Ed Bruce, a car salesman and aspiring singer/songwriter. They married on Oct. 2, 1964, in Memphis and two years later moved to Nashville, where she worked for a publishing company. The mother of four later attended Middle Tennessee State University. She became her husband’s manager and was tremendously successful in making him nationally famous as a singer, songwriter, actor, and star of commercials. She was a casting director, operating from her office on a movie lot in Burbank, CA, and worked on the TV show Maverick and the movie Urban Cowboy. She also ran the couple’s publishing companies and booking agency. She expanded into events planning in the eighties and reinvented herself after her 1987 divorce. As the owner of Events Unlimited, she won Events magazine’s Gala Award, the event industry’s top award. She also launched Patsy Bruce Productions Inc., a film and television production company. At the turn of the century, she emerged as a political activist and community leader, in addition to a newspaper columnist and freelance magazine writer. She was so committed to ensuring Phil Bredesen’s election to the governor that she became the campaign manager/chief of staff of Andrea Conte, Bredesen’s wife and a victims’ rights activist. Governor Bredesen appointed her to serve on the Tennessee State Board of Probation and Parole, where she remained for 12 years. That relationship also led to her involvement in Conte’s non-profit, You Have the Power, serving as board president and member. She was the West Nashville Presidents Council organizer, a board member of Safe Haven Domestic Violence House in Cheatham County, and vice-chair of the Arts at the Airport Foundation. She was a recent graduate of Leadership Cheatham County. She was preceded in death by her son, Beau Bruce, who died in 2019, and her parents, Henry and Hazel Smithson. She is survived by her partner, Jim Trout; son Trey Bruce (Laci); daughters Ginny Bruce and AnnMarie Bruce Pinhal (Joey); grandchildren Sara Bruce Manual (Greg), Maggie Bruce Emmick (Cory), Sela Bruce, Railee Bruce, Patrick Elder, Chelsea Jensen, Joseph Pinhal (Katie), Cathrine Pinhal and Juliana Pinhal; and great-grandchildren Eisley, Elynn, Lilah, Cason, Addison, Bentley, Bella and Cade; and her angel on the ground and caregiver, Meaghan Gay. A memorial service will be held at 11 a.m. on Tuesday, May 25 at Phillips Robinson Funeral Home, 2707 Gallatin Pike. In lieu of flowers please make donations to You Have The Power, yhtp.org or Safe Haven of Cheatham County, safehavencheathamcounty.org.

Patsy Smithson Bruce, a musical pioneer and a woman of power, beauty, creativity, elegance, and impeccable taste died on May 16. She was 81. Her unprecedented resume spanned industries, skill sets, and states as she found success in the entertainment... View Obituary & Service Information

The family of Patsy Smithson Bruce created this Life Tributes page to make it easy to share your memories.

Patsy Smithson Bruce, a musical pioneer and a woman of power,...

Send flowers to the Bruce family.