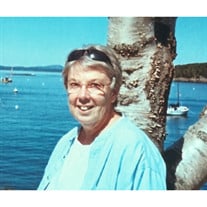 Long-time Concord resident Patricia A. Nelson, 77, died in Nashville on April 19, 2018, peacefully, after a long illness. Her daughter Sara was by her side. Through her work in adult education, Pat touched the lives of many. She had many different roles in the field, but ultimately, she was a teacher and she was fiercely proud of that title. Pat was born in Lawrence, MA., to George Knight and Helen (Flathers) Knight. She grew up in Manchester, graduated from St Joseph’s High School in 1958, and joined the Sisters of Mercy, becoming a Catholic nun. She studied French at Mount St. Mary’s College in Hookset and the Sorbonne in Paris. She got her Master’s Degree from Boston University. In 1972, she found herself teaching a theater class for prisoners at the State Prison in Concord, and was so transformed by the experience, she left the convent to pursue a career in adult education. Pat was a tireless and enthusiastic educator, advocate, and administrator. Colleagues describe her as an icon, an inspiration, a legend. Her commitment to the work has had a permanent and profound effect not only on her students and staff, but also the field itself. She was integral to the development of Concord's Second Start. She was hired at the non-profit educational corporation back when it still had “Project” in its name. For 41 years, her generous spirit, hard-working nature, and expertise touched the lives of thousands, particularly adults who had never learned to read or write, and had no high-school diploma. She helped countless people obtain GEDs. In 2000, she also joined the Right Question Institute, RQI, (formerly known as the Right Question Project), a non-profit in Cambridge, furthering her commitment to the education field. She worked to implement and develop pioneering strategies to help adult educators build and foster students’ curiosity and confidence. She also worked to engage adult learners in voting and to teach frontline workers in early childhood programs how to build their clients’ self-advocacy skills. RQI started a fellowship in her honor. Pat never stopped teaching; she never stopped learning. She absolutely loved the challenge. She was also a committed volunteer and activist, notably with Making Strides, which raises awareness and funds to save lives from breast cancer. She was also a breast cancer survivor, and in 2008, she completed a survivors’ triathlon. She quickly became a key figure in any cause with which she engaged. Pat is survived by her daughter Sara Nelson, Sara’s boyfriend, Joseph Plunket, her sister Ellen Labrie and brothers George Knight and wife Patty and Charles Knight and wife Sandy; along with many nieces, nephews, friends, colleagues and students. Her husband, Russ, predeceased her in 2006. A celebration of Pat’s life will take place on Saturday, June 23rd from 1-4pm at the Atlantic Grill in Rye, NH (5 Pioneer Road). RSVP to the following email is encouraged; all who knew Pat are welcome: [email protected] Memories, stories, or photos of Pat, can also be sent to this email. Sara, will compile these to be shared at the celebration. In lieu of flowers, Pat and Sara would love friends and family to make donations to the Right Question Institute. (For more info: www.rightquestion.org)

Long-time Concord resident Patricia A. Nelson, 77, died in Nashville on April 19, 2018, peacefully, after a long illness. Her daughter Sara was by her side. Through her work in adult education, Pat touched the lives of many. She had many different... View Obituary & Service Information

The family of Patricia Nelson created this Life Tributes page to make it easy to share your memories.

Send flowers to the Nelson family.