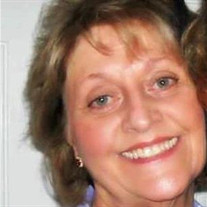 Patricia Ann White Kersey, age 68, passed away September 3, 2019. Preceded in death by her parents, Alfred and Louise White; brothers, Donald R. Brown, of Oakland City, IN, Robert "Bubbles" Brown; sister, Dona Gail Boger, of Petersburg, IN; several aunts and uncles. Survived by her daughter, Heather Louise Kersey of Nashville, TN; sister-in-laws, Agnes Brown and Karen Brown, both of Evansville, IN; nieces and nephews, Lori Brown Waite of Fort Branch, IN, Donnie Brown of Evansville, IN, Greg Brown of Evansville, IN; Hannah Gail Meinhart and Haley Nell Meinhart, both of St. Charles, MO; several cousins who are like brothers and sisters, Pam Meinhart, Debbie Greenwood,and Larry Carol, all of Evansville, IN. A private gathering will be held at the discretion of the family.

The family of Patricia Ann White Kersey created this Life Tributes page to make it easy to share your memories.

Send flowers to the Kersey family.