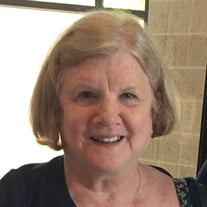 Pamela Rowe Bridges, age 75, of Hermitage, TN passed away on January 17, 2020 after a brief battle with a brain tumor. . She is preceded in death by her parents, Mack Haley and Marion Gleaves Rowe. She is survived by her devoted husband of 51 years, Charles K. Bridges of Hermitage, TN, and her daughters, Katie Dee of Mt. Juliet, TN and Beth (James) Barr, of Cedar Park, TX; five grandchildren Sarah Dee, Addison Dee, Grace Dee of Mt. Juliet, TN and Molly Kate Barr and William Barr of Cedar Park, TX; brothers Chip (Carol) Rowe, Bradley Rowe and Barton (Kim) Rowe of Mt. Juliet, and Haley Rowe of Nashville; and nieces Cornelia Rowe of Nashville, TN, Kendall Rowe of Lebanon, TN and Jeannie Bryant of Clarksville, TN; and nephews Brian Rowe and Chris Rowe of Mt. Juliet, TN, Chester Bridges, Tim Bridges and Michael Bridges of Cadiz, KY. Pam grew up in Nashville and graduated from Isaac Litton High School. She graduated with an English degree from the University of Louisville and later earned a degree in early education from Trevecca Nazarene University. She spent a number of years as a kindergarten teacher with the Metropolitan Nashville Public Schools. She was a member of the Hermitage United Methodist Church. Pam was known as Mimi to her grandchildren to whom she was devoted and who she adored. She worked to enrich their lives with love, laughter and with kindness. Pam loved to travel and had visited all 50 states as well as several trips abroad. She was an avid fan of college and professional football, but also an avid fan of the performing arts and spent several of her retirement years as an usher at TPAC. She and Charles loved community theatre and served as audition directors for Audience of One Productions of Lebanon, TN. Pam was an avid reader and thoroughly enjoyed her monthly meeting with her book club friends. She served on the board of the Friends of the Hermitage Library and was also a member of the board of directors for the Thomas-Bridges Association Graveside services officiated by Dr. Garry Speich will be held at 1:00 p.m. on Tuesday, January 21, 2020 at Spring Hill Cemetery at 5110 Gallatin Pike S., Nashville, TN. Visitation will be from 4:00 p.m.-to 7:00 p.m. on Monday, January 20, 2020 at Phillips-Robinson Funeral Home, Hadley Chapel, 1700 Hadley Ave in Old Hickory, TN. In lieu of flowers, the family asks that memorial contributions be made to the Nashville Alive Hospice.

Pamela Rowe Bridges, age 75, of Hermitage, TN passed away on January 17, 2020 after a brief battle with a brain tumor. . She is preceded in death by her parents, Mack Haley and Marion Gleaves Rowe. She is survived by her devoted husband of 51... View Obituary & Service Information

The family of Pamela Rowe Bridges created this Life Tributes page to make it easy to share your memories.

Pamela Rowe Bridges, age 75, of Hermitage, TN passed away on...

Send flowers to the Bridges family.