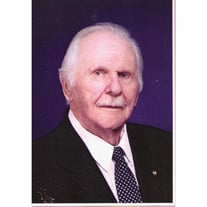 SCHAUMAN, Norman Samuel passed away November 7, 2010. Born to the late Samuel and Hermina Schauman on November 29, 1912 in St. Louis, Missouri. He is preceded in death by his wife of 66 years, Pansy May Roberson, brother, Walter Schauman and sisters. Lydia Richenbacher, Dorothy Schauman, Margaret Christ and Alvera Stowers. He is survived by his son, Norman David (Linda), of Del Ray Beach, Florida, daughter, Claudia, of Nashville, Tennessee, granddaughters, Susan DeKeyser (Richard), of Key West, Florida, Heather Esser (Mark), Erin Determan (Tom), great grandchildren, Amanda Esser, Matthew Esser, Alex Determan, and Lily Determan, all from Omaha, Nebraska. He is also survived by a host of nieces and nephews. He attended Hadley Vocational School and Washington University in St. Louis, Missouri. Mr. Schauman was a deacon at the Third Baptist Church in St. Louis, Missouri, Woodmont Baptist Church in Nashville, Tennessee and Central Baptist Church in Knoxville, Tennessee and sang in the choir for over 50 years. He was very proud of his 8 years of teaching Bible Study at the Tennessee State Penitentiary and helping parolees find jobs. Mr. Schauman worked for Carter Carburetor in St. Louis and taught Adult Education classes at St. Louis University before moving to Nashville to work for Aladdin Industry as Chief Plant Engineer. In 156, the American Society of Tool Engineers elected him "Man of the Year". He moved to Knoxville to work for Cardinal Machinery and retired from the company when he was 70. He was a 32nd Degree Mason and a 50 year member of the John B. Garrett Lodge in Nashville and a member of the Society of Manufacturing Engineers. The family would like to thank the nurses, aides and staff of the Green Hills Rehabilitation Center for their care and concern. Mr. Schauman will be laid to rest on Friday, November 12, 2010, in the St. Peter's Cemetery in St. Louis, Missouri at 2:30PM. In lieu of flowers, the family will appreciate contributions to Woodmont Baptist Church or the charity of your choice.

SCHAUMAN, Norman Samuel passed away November 7, 2010. Born to the late Samuel and Hermina Schauman on November 29, 1912 in St. Louis, Missouri. He is preceded in death by his wife of 66 years, Pansy May Roberson, brother, Walter Schauman and... View Obituary & Service Information

The family of Norman Samuel Schauman created this Life Tributes page to make it easy to share your memories.

Send flowers to the Schauman family.