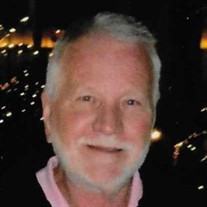 On October 7, 2021 Newsom "Pete" K. Alexander, Jr. of Hendersonville, TN, loving husband, brother, uncle, and friend, passed away at the age of 74. He was preceded in death by his parents Dorothy & Newsome K. Alexander, Sr., his brother Barry Alexander, and his sister Lisa Cole. He is survived by his loving wife Kimberly, his brother Kevin Alexander, mother-in-law Norma Divinny, sister-in-law Paula Dyer, brother in-law Tommy Cole, nieces Amy Riddle (Marshall), Katie Cole, Lilly Dyer, nephew Spencer Dyer and great nephew Cole Riddle. He was born in Nashville, TN, on March 4, 1947. Pete was the oldest sibling, to his beloved brothers Barry, Kevin, and sister Lisa Cole. He served with honor in the United States Marine Corps, and was a proud Veteran of the Vietnam War. Pete married the love of his life, Kim, and the two were inseparable for the next 30+ years. The couple loved to travel and were blessed to make many wonderful memories over the course of their marriage. He loved sports, especially Dodgers Baseball, and Miami Dolphins football, either of which could frequently be found as the logo on one of his many caps. He retired from the Metropolitan Government and AT&T Communication, and was an active member of Hendersonville First Baptist Church. Pete loved God, and served his church community as an usher and greeter, where he welcomed countless people with a smiling face, hearty handshake, and a warm conversation. Pete never met a stranger, and was never without his trademarked laugh, as many of his loving friends could attest. He was a friend who was always willing to help, no matter what. He will be missed. Visitation will be at The First Baptist Church Hendersonville, TN, 106 Bluegrass Commons Blvd in Hendersonville, TN, on Wednesday, October 13 from 10am-12pm. Service will be followed immediately in the chapel with Pastor Bruce Chesser officiating. Interment will be at Woodlawn Memorial Park in Nashville, TN at 2pm. Arrangements by Phillips-Robinson Funeral Home.

On October 7, 2021 Newsom "Pete" K. Alexander, Jr. of Hendersonville, TN, loving husband, brother, uncle, and friend, passed away at the age of 74. He was preceded in death by his parents Dorothy & Newsome K. Alexander, Sr., his brother Barry... View Obituary & Service Information

The family of Newsom K 'Pete" Alexander Jr. created this Life Tributes page to make it easy to share your memories.

Send flowers to the Alexander family.