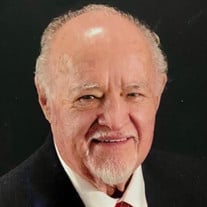 NASHVILLE-Morris Frazier Estes, 88, of Madison, TN passed away peacefully in his sleep at home on Monday, February 22, 2021. He will be met in heaven by his late parents, Hollis and Hallie Estes, his high school sweetheart and love of his life Joyce Porterfield Estes, sister Mary Kathleen Alexander, brother and sister-in-law Billy Joe and Eva Estes, niece Cynthia Champion, niece Jackie Reinhart, nephew Billy Joe Estes, Jr. and his “best friend” Isaac Williams, Sr. He is survived in his own words “by his greatest successes…his children and grandchildren”: Terry E. Wilbanks (Tony, Jonathan), Morris F. Estes, II, Brenda E. Parks (Jeff, Rhae Lauren, Marielle), Linda E. Martin (David, Brittany, Marissa), Lisa E. Connors (Keith, Kaleigh, Kristen, Kartis), Dawn Estes, Kathleen Gale Uhlhorn (Gil, Garner, Worrick); “Special Mother to his children” Frances Williams (Isaac and their beloved eight children); and his dear long time companion Jeanne Brady. The family sends a special thank you to our “secret sister” and his dear caretaker, Kim Laymance, and his devoted friends. The family also gratefully acknowledges the kindness of the Virginia (Sue) Papuchis family and the Smartt family and acknowledges the benevolence and support of the Honorable Muriel J. Robinson, the Honorable Gale B. Robinson and the Phillips-Robinson Funeral Home. He was born on July 7, 1932 in Mt. Juliet, TN and was a graduate of the Class of 1950 at Isaac Litton High School. After graduation, he attended the University of Tennessee and was a member of Sigma Phi Epsilon fraternity. In January, 1953, he enlisted in the U.S. Air Force and earned his way to becoming a 1st Lt. fighter pilot. He flew a T28, T33, F84 Jet, F86 Saber (in which he broke the speed of sound), F100, C-119 Boxcar; he retired on April 28, 1957. He flew commercially for Mobile Oil Company, opened a real estate brokerage company and became a residential developer in Madison, TN. In 2003, he earned a Bachelor of University Studies degree from Middle Tennessee State University. He was a member of First Baptist Church of Hendersonville. He was one of the most generous persons on this earth to his family, friends and even those he did not know personally. A private graveside service will be held. In lieu of flowers, a donation may be made to Zion Upper Room Apostolic Church Missions, P.O. Box 1734, Gallatin, TN 37066, or by Venmo/Cashapp at 615.604.9518.

NASHVILLE-Morris Frazier Estes, 88, of Madison, TN passed away peacefully in his sleep at home on Monday, February 22, 2021. He will be met in heaven by his late parents, Hollis and Hallie Estes, his high school sweetheart and love of his... View Obituary & Service Information

The family of Morris Frazier Estes created this Life Tributes page to make it easy to share your memories.

Send flowers to the Estes family.