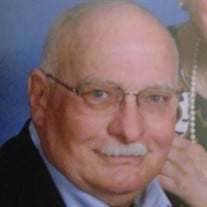 Milton Burnet “Bud” Wilcox III, of Hendersonville, TN, passed away January 1, 2020 at the age of 77. Bud was the epitome of the phrase “Jack of All Trades” as his work life included bird bath cleaner, paper boy, radio DJ, taxi driver, auto mechanic, small business owner, counter installer, restaurant manager, restaurant maintenance man, BBQ smoker, race car driver, and gunsmith. And those are only what the family can remember. Needless to say, Bud’s all-in and varied nature extended to his hobbies. Florida Jaycees, Circle Players, the Barbershop Harmony Society, Father Ryan Band, St. Joseph Church, the NRA, the Knights of Columbus, Public Television, and the Adventure Science Center all benefitted from Bud’s tunnel-vision. Bud spent his early years with his sister, Peggy, tormenting their younger brother, Mark, while they lived in Pittsburgh, PA. He met his better-half, saint-on-earth Ronnie Cody, when she came into the auto shop where he worked. Ronnie was immediately smitten with the exciting mechanic and race car driver with the nice legs, blue eyes, and good singing voice. Bud and Ronnie were married for a remarkable and never-dull 53 years. After brief stays in Massachusetts, New Jersey, and Florida, they settled in Madison, TN with their girls, Alaine and Valerie, and eventually the son he never had, his son-in-law Ray, and grandchildren Corey and Michaela. Family and friends could always depend on Bud to run late, spend a dime when he had a nickel, give you “the look,” and have the last word. But he also worked a project to perfection, was honest to a fault, taught you everything he knew, answered every question, and told the worst corny jokes. A Memorial Mass, without barbershop singing, will be held 11 AM Tuesday, January 7, 2020 at Our Lady of the Lake Catholic Church in Hendersonville, TN. A short reception will follow. The family asks that, in lieu of flowers, donations be made to the Alzheimer’s Association, the American Diabetes Association, or your local public television station.

The family of Milton Burnet Wilcox III created this Life Tributes page to make it easy to share your memories.

Send flowers to the Wilcox family.