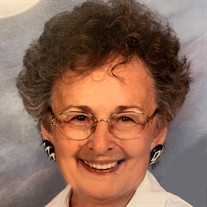 Mildred Ann (Millie) Grammer, age 89 of Madison, TN passed away September 8, 2020. When she and her husband Del first married, Millie dropped out of college to work for the Federal Reserve Bank since they could not afford for them both to attend college. She went on to conduct “man on the street” reporting for a marketing research company, gathering consumer response for new products. Her dream job though was working for Odom’s Tennessee Pride Sausage Company. She was promoted to Credit Manager in 1973, and retired 25 years later. During her years with Odom’s, Millie attended evening classes to complete her Bachelor’s degree in Business from Tennessee State University at age 53, while helping the company grow from six employees to 70, with distributors throughout the US and overseas. Instrumental in establishing the Food and Food Services group in Nashville, she represented Odom’s in the NACM- Cincinnati Meat Packers of America and the NACM- Southeast Unit Food and Allied Lines Group. As a member of the Executive Committee, she spearheaded the improvement of the Association’s by-laws and served on the Salary and Benefits Committee for four years. Millie also served as State Treasurer for the TN Jaycette’s and has been a member of the Madison Circle King’s Daughters since 1993. She and Del also served as the Food Chairpersons for Madison Hillbilly Days. Shortly after her retirement from Odom’s, her former daughter-in-law Zan Martin asked her to step in and assist in unraveling an accounting problem for her advertising agency, Martin & Company. She was named General Manager in 1996, and retired from that position 18 years later. Never one to sit still for long, she was hired by King’s Daughter’s Development Center as Development Coordinator 10 years ago, and remained employed until her death. All who knew her were awed and inspired by Millie’s love for her Lord and Savior. A lifelong member of the United Methodist Church, she taught Sunday School, sang in the choir and served on councils and committees at every church she attended while her husband Del pastored various Middle TN churches. She first attended City Road Chapel as a baby, and since has been a member periodically her entire life where she participated as a Sunday School teacher, member of the choir, and served as trustee. Most recently she chaired the finance committee. Volunteerism could have been Millie’s middle name. She was a delegate for Soroptimists International where she served as President several years traveling throughout the Unites States, Canada, Turkey and Japan, and then as Governor for the Southern Region encompassing TN, MS, AL, GA and FL. She was named to the U.S. Committee for Employment of the Handicapped, responsible for investigating and informing over 40,000 clubs how ill equipped our country is to handle the handicapped. In her spare time, she loved working in what only can be described as her show worthy home garden. As a lifelong member of the Madison community, Millie has volunteered in just about every philanthropic activity where there was a need. On Saturday, August 29, 2020, a Representative from the Tennessee State Legislature presented her with a resolution at her home, recognizing and honoring Millie for the servant she has been, not only to the community, but the entire state of Tennessee. Millie is predeceased by mother Mildred Capps Nix, father Grady Nix, brother Rip Nix, son Val Grammer, and son Todd Grammer. She is survived by Grandson Jeff Grammer (Abby) Great Grandchildren Vicki, Todd, Noah and Aria Grammer, and Grandson Steven Grammer. Visitation will be Friday from 5pm until 7pm and Saturday 10 to 11am at City Road Chapel United Methodist Church Madison, TN. Services will be held 11 am Saturday at City Road Chapel. Interment to follow at Spring Hill Cemetery. In lieu of flowers, donations can be made to King’s Daughter’s Development Center, 590 N. Dupont Ave, Madison, TN 37115 or City Road Chapel United Methodist Church, 701 Gallatin Rd. S., Madison, TN 37115 Due to the Covid-19 Outbreak, the church is reminding people masks are required and to practice social distancing. Food and Drinks will not be allowed in the church.

Mildred Ann (Millie) Grammer, age 89 of Madison, TN passed away September 8, 2020. When she and her husband Del first married, Millie dropped out of college to work for the Federal Reserve Bank since they could not afford for them both to attend... View Obituary & Service Information

The family of Mildred Ann "Millie" Grammer created this Life Tributes page to make it easy to share your memories.

Send flowers to the Grammer family.