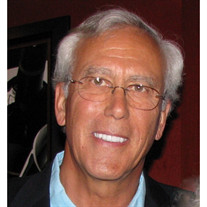 MICHAEL DAVID ROSE, 75, transitioned peacefully April 2, 2017 surrounded by the sounds that gave him the greatest comfort and joy—his favorite songs and tender words of his loved ones. Michael will be lovingly remembered and deeply missed by the love of his life, Debbi Fields Rose, and his children, Matthew, Gabrielle, Morgan, Mikey, Jessica, Jenessa, Jennifer, Ashley, and McKenzie. Michael's memory is also carried by his sister Rebecca "Becky" Nuber and her family, as well as his grandchildren, Elle, William, Calvin, Annabelle, and Myles. He is predeceased by his parents, William and Annabel Rose, as well as his beloved son, William Maxwell Rose. At 6'6", he will be remembered by all for his giant presence, his thunderous laugh, his wonderful hugs, and his love of Memphis. Michael was a giant of industry. He earned a degree in business administration from the University of Cincinnati and a law degree from Harvard. As a partner in a Cincinnati law firm, Michael worked directly with one of the largest franchisees of Holiday Inns. It was through this relationship that he would move to Memphis in 1973 to help turnaround Holiday Inns. Rising quickly in the company, he would eventually become Chairman of the Board and CEO of Holiday Corp, (Holiday Inns Hotels, Hampton Inns, Embassy Suites, Homewood Suites, and Harrah's Casinos), which would later become Promus Companies and Harrah's Entertainment, Inc. Through his stewardship, the Memphis-based company became the hotel and gaming industry leader. Continuing his belief in Memphis-based companies, he later went on to step in as Chairman for First Horizon National Corp (First Tennessee Banks) during the Great Recession, fighting for the company to remain a state bank, as opposed to being sold to a nationwide conglomerate and losing its community ties. His illustrious career included serving as Chairman of Gaylord Entertainment, and the numerous boards he sat on, including Steinmart, Ashland Oil, Darden, and General Mills where he was the longest tenured board member in the company's history until his retirement in 2016. He was a giant in his community. It was his love of Memphis and belief in the power of communities that inspired him to make a great city even greater. He touched the lives of many Memphians through his work at Youth Villages, the Church Health Center, and the Mike Rose Soccer Complex. His belief in education as a tool to self and community improvement led him to support many education initiatives, including University of Memphis athletic scholarships, campus improvements, and summer travel experiences for scholarship students at St. George's Independent School, St. Mary's Episcopal School and Memphis University School. His belief in the arts was reinforced by leading efforts for the Rose Theaters at both the University of Memphis and St. Mary's. In recent years, much of his time was spent managing The Rose Foundation, which focuses on improving education and health opportunities as well as cultural enrichment in the communities in which his family lives. Even while fighting the battle of his life against cancer, he selflessly dedicated himself to one final gift to Memphis. He spearheaded an ongoing community partnership to create an aquatics center at the University of Memphis which will be the only one of its kind in the Mid-South. The center will be dedicated to promoting the health, fitness, and diversity of the community for years to come. He was a giant among family and friends. Michael loved his friends dearly and his family even more. He was quick to help when asked, faster when he saw somebody in need. His love was often expressed by his famous hugs and thoughtful words. As he grew older, his life's work was centered around his community, his friends, and always his family. When asked about legacy, Michael said his legacy for which he was most proud was and will always be his family. His family will honor his legacy through The Rose Foundation. "I don't think I planned so much as I dreamed. Big audacious dreams that somehow turned into reality. The reality has been more fantastic than any of my dreams." - Michael D. Rose Memorial services will be held Sunday, April 9, at Temple Israel – 1376 East Massey Road, Memphis, Tennessee 38120. A reception will be from 1:30 to 3pm and service at 3pm. Memorial donations can be directed to the following: The Michael D. Rose Memorial Fund c/o Community Foundation of Greater Memphis 1900 Union Avenue Memphis, TN 38104 Or online: www.cfgm.org/give-now/tribute-gifts directed to the Michael D. Rose Memorial Fund. Arrangements by the Phillips-Robinson Funeral Home, 2707 Gallatin Pike, Nashville, TN. Family owned and operated since 1929.

MICHAEL DAVID ROSE, 75, transitioned peacefully April 2, 2017 surrounded by the sounds that gave him the greatest comfort and joy&#8212;his favorite songs and tender words of his loved ones. Michael will be lovingly remembered and deeply missed... View Obituary & Service Information

The family of Michael David Rose created this Life Tributes page to make it easy to share your memories.

Send flowers to the Rose family.