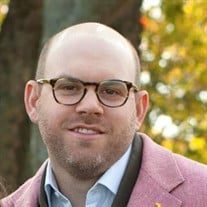 Matthew Robert Davies, age 35, went to see his Savior face to face early Sunday morning, December 27, 2020 at home in Nashville, TN. His sudden and unexpected passing was likely related to an undetected heart condition. Matt was welcomed into the world by his parents, Dale and Nancy, on April 5, 1985 in St. Charles, Illinois. He grew up in Omaha, Nebraska with his two older brothers, Brad and Judd, surrounded by his huge extended family, including his 9 cousins that acted more like siblings. From a young age, he was interested in both sports and style. He would change costumes five times a day and once chose to be catcher on his baseball team because that position had the best gear. He spent his high school days at Millard North going from football practice to theater rehearsal, as he participated in multiple productions every year. His love for singing and dancing continued into adulthood as he sang at weddings, passionately participated in worship songs at church, and tore up the dance floor at every opportunity. The thing Matt was most proud of was his role as a husband and father. Matt is survived by his wife and the love of his life, April Dill Davies, daughter of Rick and Beth Dill. Matt and April met in 2011 at a friendly game of laser tag. He immediately asked for her number that day and was completely smitten from that point on. His family knew Matt was head over heels for April when he spent the better part of a family vacation in the cruise ship’s business center trying to send her emails while on international waters. They were married on September 21, 2012. After a season of great anticipation, they welcomed their daughter, Eleanor, in September of 2015. Soon after, their son, Walter, was born in November of 2017. Matt took great joy in his children and approached them with tenderness and playfulness. He was known for his gentle and warm spirit and never missed an opportunity to cuddle with them. He was also known as the fun uncle to his 6 nieces and nephews and affectionately referred to his sisters-in-law, Traci and Katy, as his sisters. He graduated from University of Nebraska - Lincoln, with a degree in Fashion Merchandising, which he went on to use in creative endeavors in both retail and lighting, working with his brother-in-law, Austin. Matt was known for his fashion choices. Always aware of the latest trends (even if he chose to ignore them), Matt was known for his meticulously put together outfits. This process almost always took longer than anticipated and caused him to be fashionably late - which was very on brand. Not known for his punctuality, we cannot believe that he has arrived in Heaven so early. We will miss his effortless ability to make friends with anyone, his incredible Donald Duck impression, his ability to grow an amazing beard seemingly overnight, his uncanny puzzle skills, the ridiculously detailed and slow way he unwrapped gifts, and his giant, all-consuming bear hugs. Matt expressed his confidence and faith in Jesus Christ, even in the most difficult and darkest hours, many of which Matt and April experienced together in the last few years. He had great confidence in the love and hope that comes through a faith in Jesus and the ability for that hope to carry you through trials. This belief is expressed in the book of Isaiah 41:10. “Fear not, for I am with you; Be not dismayed, for I am your God; I will strengthen you, I will help you; I will uphold you with my righteous right hand.” We are confident that Matt is more alive now than ever before and he gets to be with his Lord and Savior for eternity. There will be a private family service of remembrance for Matt at their church home, Midtown Fellowship. In lieu of flowers, financial gifts to support April and the kids can be made in the link below. The family has also set up an email account – [email protected] ¬ – where you are invited to send encouragement to the family, stories and memories of Matt, and anything else that the Lord might bring to mind that she can read and hold onto in the season ahead. Support the Davies: https://www.gofundme.com/f/matt-davies-memorial-fund?utm_medium=copy_link&utm_source=customer&utm_campaign=p_lico+share-sheet If you are reading this, there is no doubt he loved you and made you feel welcome and at ease in his comfortable presence. Thank you for your friendship and love for Matt.

The family of Matthew Davies created this Life Tributes page to make it easy to share your memories.

Send flowers to the Davies family.