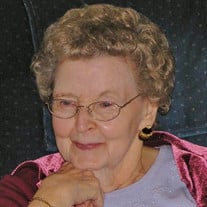 After a long, happy life with family and friends, Mary Ruth Andrews Wessel, age 95, passed away June 27, 2020, at Alive Hospice Nashville. A resident of Old Hickory for more than sixty years, Mary Ruth was born to Iona Gilliam Andrews and Henry Wilson Andrews in Sparta, Tennessee. She was preceded in death by her husband Robert and siblings George, Harold, and Martha Andrews. Surviving family include daughters Norma [Ray] Conatser and Martha [David] Greenfield; six grandchildren [Mark, Ryan, and Robbie Conatser and Peggy, Daisy, and Matt Greenfield]; thirteen great-grandchildren; three great-great-grandchildren; and many nieces and nephews. After graduating from Tennessee Tech in 1944, Mary Ruth worked as an Atomic City girl in Oak Ridge until the end of the war and her husband’s return. They eventually settled in Old Hickory, where Mary Ruth taught fourth grade at Amqui School for twenty-eight years until retirement. She enjoyed birdwatching, gardening, playing bridge with family, collecting pink Depression glass, singing in the church choir, playing the piano, traveling, making Christmas candy, and cheering on her beloved Vanderbilt Commodores at every home game and SEC tournament. Even after her husband’s death in 2010 and moving to McKendree Village, she remained a southern lady who enjoyed keeping up with her friends and family members and so appreciated her loving caregivers at McKendree. A private family graveside service will be held at Springhill Cemetery. Memorials in her name may be made to Alive Hospice Nashville or the Old Hickory United Methodist Church.

The family of Mary Ruth Andrews Wessel created this Life Tributes page to make it easy to share your memories.

After a long, happy life with family and friends, Mary Ruth Andrews...

Send flowers to the Wessel family.