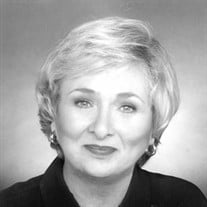 Mary Jo Martin LeFevre Dusenberry passed away peacefully on December 22, 2020. Mary Jo was born on March 3, 1940 in St. Louis, MO, to William Martin and Ruth Dunham Martin. While growing up, she attended Brentwood elementary and high school in St. Louis, and spent most summers at her grandparent’s farm in New Cambria, MO with her numerous cousins and family. She then attended the University of Missouri where she studied English. She was a member of Kappa Alpha Theta sorority where she made many of her lifelong friends. After graduating from the University of Missouri, Mary Jo set a goal of visiting 40 different countries before she turned 25 years old, and she accomplished this goal over the next three years. After graduation, Mary Jo joined the United Service Organizations (USO) Division of the U.S. military and spent the next several years traveling abroad scheduling and arranging for celebrity entertainment of US troops who were pulled from the front lines, and she did so with great success. While in the USO, Mary Jo especially enjoyed the beautiful lands, culture and lifestyle of Southeast Asia which sparked her passion of collecting Asian influenced art and furniture. She later moved to Thailand where she became fluent in Thai and taught English. Upon returning to the United States, Mary Jo settled in Virginia Beach, VA where she embarked on a new career as a first-generation jeweler, combining her knowledge of jewels and stones learned in the orient with her entrepreneurial spirit and unfailing energy to succeed, which resulted in Facet’s Jewelers, in Virginia Beach, VA and ultimately a second store in nearby Norfolk. Facets Jewelers was a member of the American Gem Society and was chosen by Tiffany & Co. and Rolex to be the exclusive distributor of their merchandise for the Tidewater area at the time. After retiring from the jewelry business, Mary Jo lived in Winter Haven, FL for several years before moving to Nashville to be closer to family and her grandchildren. Mary Jo is preceded in death by her parents, William and Ruth Martin, her brother, Richard Martin and her husband Paul Dusenberry. She is survived by her daughters, Lori LeFevre Steele of Portland, OR and Leslie Bowman Robinson (Worrick) of Nashville, TN as well as two grandchildren, Quint Robinson and Aubrey Robinson of Nashville, and niece Jamie Martin Kubota (Ken) of San Francisco, CA and nephew Jesse Martin (Kelly) of Sugar Land, TX. A celebration of life will be held at a future date. Arrangement’s under the direction of Phillips-Robinson Funeral Home, Nashville, TN.

The family of Mary Jo Dusenberry created this Life Tributes page to make it easy to share your memories.

Send flowers to the Dusenberry family.