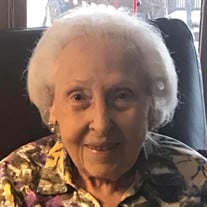 Marie Holman Wiggins died peacefully on May 24, 2022, in Nashville, Tennessee. Visitation with the family will be held on Tuesday, May 31, 2022 from 10:00am - 1:00pm at Eastwood Christian Church, 1601 Eastland Avenue, Nashville, TN 37206. Funeral services will be held at 1:00pm with burial immediately following at Spring Hill Cemetery, 5110 Gallatin Pike, Nashville, TN 37216. Marie was born June 26, 1921, in Livingston, Tennessee, where she attended Livingston Elementary School and Livingston Academy. Under the watchful eyes of her loving parents, her childhood was filled with fun. She loved ballgames, riding her bicycle, her friends, and all manner of holidays and celebrations. She practiced piano faithfully and hoped to be a good musician one day, and she attended church every Sunday. After graduating from Tennessee College for Women in 1943, she returned to Livingston Academy as a teacher. She married Charles Greer Wiggins, in 1944, and said she liked him because he was fun-loving, kind, and treated her with respect. Marie and Greer lived briefly in Vallejo, California for 16 months while Greer served in the United States Navy, before returning to Tennessee. They were married for 46 years, until his death in 1990. Marie was unusual for her time because she was determined to continue her education even after marrying and having children. She returned to college to study for an Elementary Teaching certificate at George Peabody College for Teachers. During her first six years of teaching at Gra-Mar Elementary School in Nashville, she continued taking classes and received her Master of Arts Degree in 1966 and her Educational Specialist Degree in 1979, both from Middle Tennessee State University. She was a teacher, consultant, and principal for Metropolitan Nashville Public Schools for 30 years, a member of Eastland Music Club, Delta Kappa Gamma Society, American Guild of Organists, Metro Nashville Retired Teachers Association, and GFWC Stones River Woman’s Club. Music was a huge part of Marie’s life. She was an accomplished pianist from a young age, and she was the organist for Eastwood Christian Church for 48 years. She directed operettas with elementary school children while she was teaching, and she was the pianist for the Sunshine Singers, a Metro Nashville Schools educators’ choir. All of her children and grandchildren sat at her piano and home organ with her at some point, and most of them had to be asked to treat them a little more gently from time to time. She was a devoted mother and grandmother. She was affectionately known as “MamaRee” to her grandchildren and great-grandchildren, and she never missed a milestone or important event in their lives. Eastwood Christian Church was Marie’s home church for over 75 years. Her steadfast Christian faith was the foundation of her life, and her deepest values were rooted in honesty, kindness, loyalty, and love. Marie remained curious throughout her life, and she encountered new ideas with openness and respect for others. She was a lifelong learner, an avid reader, and she sometimes did her morning crossword puzzle in pen. She was whip smart until the day she died, and she encouraged her family to follow their dreams just as she followed hers. She was a good friend. Marie wrote letters to friends and family often, and in one such letter, she said, “Faith in a higher spiritual power is the essential for me. I believe love is the greatest gift in life. I share that love with you, my beloved family.” Our mother, grandmother, great-grandmother, aunt, great-aunt, and friend will be dearly missed. She is preceded in death by her husband, Charles Greer Wiggins; her parents, William Lester and Mae Smith Holman; her brother, William Houston (Butch) Holman; her sister, Virginia Lucille Holman. She is survived by her son, William Greer Wiggins (Gay); daughters, Betty Wiggins Lynch (Pat), and Jeanne Marie Wiggins; grandchildren, Kendall Marie Lynch (Jason Green); Greer Matthew Lynch (Megan); Michael Patrick Lynch (Hannah); greatgrandchildren, August David-Patrick Green, Seth Michael Lynch, Colin Robert Lynch, Mary Walker Green, Vaughn Ellis Lynch, and Adeline Clark Lynch; sister-in-law, Joyce Sidwell Holman; niece, Betty Holman Massengille; nephew, William Lee Holman; several great and great-great nieces and nephews. Memorial donations can be made to The Wiggins Building Fund at Eastwood Christian Church, 1601 Eastland Avenue, Nashville, TN 37206, The Nashville Symphony Orchestra, 1 Symphony Place, Nashville, TN 37201, and Belmont University. It is the policy of Eastwood Christian Church that all in attendance wear masks. The family respectfully requests that this policy be observed. We appreciate your cooperation. The service will be live-streamed on the ECC Facebook and and YouTube channel

The family of Marie Holman Wiggins created this Life Tributes page to make it easy to share your memories.

Send flowers to the Wiggins family.