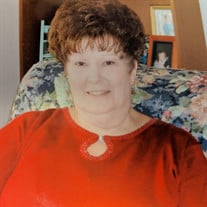 OVERSTREET, Margie Fay, 78, of Madison, TN, passed away September 21, 2019. She was born January 24, 1941, on her father’s birthday, in Gainesboro, Jackson County,Tennessee ,to Hazel and Hubert Kernell. She was the youngest of four children, with two brothers and one sister. She grew up in the country, with beautiful hills surrounding their home. Her father was a carpenter and farmer. Her mother was a country housewife. They grew their own food and lived a quiet, hardworking life. She went to a one room schoolhouse just down the road. They attended a small white church also just down the road. She was a very pretty young girl that grew up to be a beautiful woman. She married her childhood sweetheart, John Hix. They ran away to Mississippi to be married when she was only fifteen. A year and a half later their first child, Beverly, was born in Ohio. They had moved there for work, and had relatives and friends that were already there. Times were hard in the country and most young people were trying to get out. It’s hard to imagine a 15 year old girl getting married, and moving North when she had hardly been out of Jackson County. She has spoken of how afraid she was, especially when giving birth. Things were so different then and they didn’t explain anything to her. Thankfully she had two brothers and sisters in law in Ohio as support. Three months after their daughter was born they moved to Nashville, where they remained. In 1961, their second daughter, Michelle, was born. Then Margie spent her time busily being a mother and keeping house. During her children’s school years, she was always involved in their activities. She was a room mother, PTO member, and Girl Scout leader for several years. She could always be counted on and those were good times. She loved helping and being with the kids and the kids loved her. She went to school to be a Nurse’s Aid. Margie also was a Pink Lady at Madison Hospital for many years, where she made many friends and which she thoroughly enjoyed. Life went on as it does, and she and her childhood sweetheart had problems and were divorced. This was the beginning of many hard years for Margie. She was not prepared in any way for being self sufficient. She had spent her life to that point doing what a lot of women in the 60s and 70s did – taking care of her family. Never having worked in order to support herself, it was a sad and difficult time for her. This went on for many years. She made do, though. Margie was a Christian, and attended the Church of Christ until she was no longer able. Through the good and bad, her strong faith remained. As the years went by, one by one her parents, siblings, aunts, uncles and rest of the family passed away. She had such a strong love for them and was good to them all. She loved her nephews that are still here with all her heart. She took good care of them when they were young and needed her. Any time she was very sick, she would talk about them as if they were still small children, telling her daughter to make sure they were ok, that they had what they needed. She had such a loving heart. In her forties she met a man, Reed Overstreet, and they were married for 24 years until he passed away. Her health started declining shortly after that, and steadily got worse. She was stricken with dementia when she was 70 years old, which was the most tragic thing of all. Her last years were not very happy. Dementia robs you of everything and you don’t even know why because you don’t realize what’s wrong with you. It’s hard for people to help you because you don’t think you need help, and you believe they’re actually trying to take everything away from you. Margie was an outgoing person with many friends throughout her life. Sadly, most of them passed before she did. Her daughters, son in laws, grandchildren and many others will miss her tremendously. She has been released from the chains of dementia, many serious health conditions, and unhappiness on this earth, and is now free at last to spend time with God, Jesus, and all of her loved ones that have been waiting for her on the other side. She is preceded in death by her husband Reed Overstreet. She is survived by her daughters, Beverly (David) Tidwell & Michelle (Gary Keffer) Hix; grandchildren, Rebecca Tidwell, Joel Tidwell & Jeremiah (Hailey) Meyer; great grandson, Jed Meyer; loving caregiver & friend, Lajuana Williams. Services will be held 1:00 PM Friday at Phillips-Robinson Funeral Home with visitation beginning at 11:00 AM. Interment to follow at Forest Lawn Memorial Gardens. PHILLIPS-ROBINSON FUNERAL HOME, (615)262-3312. www.phillipsrobinson.com.

OVERSTREET, Margie Fay, 78, of Madison, TN, passed away September 21, 2019. She was born January 24, 1941, on her father&#8217;s birthday, in Gainesboro, Jackson County,Tennessee ,to Hazel and Hubert Kernell. She was the youngest of four children,... View Obituary & Service Information

The family of Margie Fay Overstreet created this Life Tributes page to make it easy to share your memories.

Send flowers to the Overstreet family.