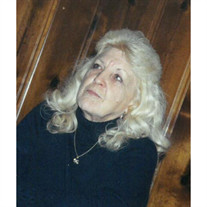 CAMPBELL, Judy Carol of Nashville, TN passed away December 26, 2016 at age 69. She was preceded in death by her son, Shannon Lee Sartain; parents, Tom and Roberta Campbell and her brothers, Jerry Campbell and Terry Campbell. Judy is survived... View Obituary & Service Information

The family of Judy Carol Campbell created this Life Tributes page to make it easy to share your memories.

Send flowers to the Campbell family.