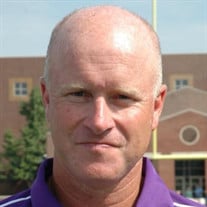 Joseph Siener Coode, devoted husband, father, teacher, coach extraordinaire lost his 3.5 year fight to lung cancer on January 18, 2022. Joe was 60 years young. He was, as always, surrounded by all his family and friends who loved him dearly.... View Obituary & Service Information

The family of Joseph Siener Coode created this Life Tributes page to make it easy to share your memories.

Send flowers to the Coode family.