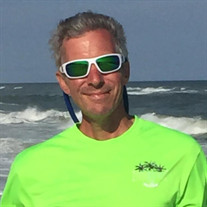 On Tuesday, July 27, 2021, John Martin, Jr., loving husband and father, passed away at age 61 after a valiant battle with cancer. Born June 1, 1960 in Wooster, Ohio to John Martin, Sr. and Nancy (Burrell) Martin. As a young teen, John spent three years in Germany with his mom and his stepdad, who was serving in the United States Army. Once back in the states, John graduated from Wadsworth High School in Wadsworth, Ohio. John went on to serve his country in the United States Army, stationed in Germany, with an Honorable discharge at the rank of SP4. John was a helicopter crew chief and mechanic, and loved flying just above the treetops. He also attained expert level as a sharpshooter and in the use of hand grenades. John retired from the United States Postal Service on June 1, 2020, after 25 years as a City Mail Carrier. On May 14, 2011, he married Deborah (Debbie) Stowers Vandiver. Together they loved their blended family, Cory Martin, and Connor and Sarah Vandiver. Once the kids reached adulthood, John and Debbie were able to fulfill their dream of moving to the Gulf Coast. John always had a passion for golf and fishing, and was a lifelong lover of rock and roll music. He was known for his quick wit, his infectious smile, and his kind and compassionate spirit. John was preceded in death by his mother, Nancy. He is survived by his father, John Martin Sr. (Hazel); wife, Debbie; children, Cory, Connor (Maddie) and Sarah; granddaughter, Nora; sister, Amy Jo Rodziewicz; step siblings, Leslie Gault Mendelsohn (Paul), Sidney Gault, and Jane Gault. Visitation will be at Phillips-Robinson Funeral Home Monday, Aug. 9th from 3-7pm and Tuesday, Aug. 10th from 11am until the time of services at 12 noon. Interment will follow at 2pm at Middle-TN State Veterans Cemetery. In lieu of flowers, donations may be made to the American Cancer Society Memorial Foundation Hope Lodge, Nashville, TN.

The family of John Martin Jr. created this Life Tributes page to make it easy to share your memories.