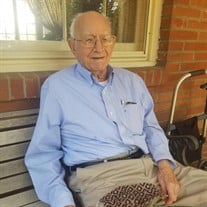 John Geist Colley was born on January 17, 1921 and passed away comfortably at his Nashville home surrounded by family on November 19, 2021. John was preceded in death by his wife, Mildred Smith Colley, and their son, John Geist Colley II (Jack). John was the last surviving child of 10 from William Hubert Colley & Mary Agnes Colley. John is survived by his children, Sue Crowder (Jim), Lee Colley (Anne), and Jolyn Colley, 10 grandchildren, and numerous great-grandchildren. At the age of 100, John had a long and full life. He held two master's degrees and was also a Marine who served in WWII. His career spanned from being Park Superintendent at multi Tennessee State Parks, 30 years with the Ford Plant, and one of the longest-standing property investors, managers, and developers in Nashville. His business card proudly reads, “Helping People Make Nashville Home Since 1954.” John was invested in caring for his community and he graciously donated a land easement that connects the Shelby Park Greenway to the public park entryway on McGinnis Drive in Inglewood which many enjoy each day. John was a member of the American Legions, the Optimist Club, and prior to his death was one of the oldest living graduates of Father Ryan High School. John was recently featured in The Tennessean for his 100th birthday and was quoted saying his secret to a long life was, “I love life, I love living it, and I want more of it.” He was charismatic, a hard worker, always had a wise saying and a two dollar bill to share, and will be missed by many. The visitation will be November 30, 2021 at the family homestead at the Log House from 2- 5:30 pm followed by the rosary beginning at 5:30 pm. The funeral mass will be December 1 at 11 am at St. Joseph’s Catholic Church followed by burial at Mt. Olivet Cemetery and then the wake at the Log House. Out of consideration for the Covid pandemic, please wear a mask.

John Geist Colley was born on January 17, 1921 and passed away comfortably at his Nashville home surrounded by family on November 19, 2021. John was preceded in death by his wife, Mildred Smith Colley, and their son, John Geist Colley II (Jack). John... View Obituary & Service Information

The family of John Geist Colley created this Life Tributes page to make it easy to share your memories.

Send flowers to the Colley family.