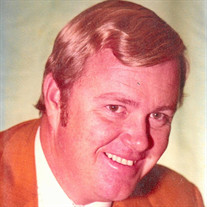 Jerry Lee Potts, GM Sales Executive, passed from this earth on Wednesday, August 18, 2021. He is survived by the love of his life, Jeraldine Ann Rosota, whom he met on the Fort Lauderdale beach. They were married on June 22, 1963 and his dear and only Son, Norman Archer Potts was born in 1969, both now of Yuma AZ. He is also survived by his very devoted sister, Emma Jane Potts Toy, of Old Hickory, TN, Sister-in-law Julia Hall of Solana Beach, CA and Nephews David and Daniel Hall of San Diego, CA. Preceded in death by his parents Geneva Maureen Sadler and Herman Carry Lee Potts of Madison, TN also, Grandparents Amanda Louise Emma Marlin and William Dickson Potts of the Kinderhook community of Maury County TN and Grandparents Eva May Harlin and Samuel Harrison Sadler of Madison TN formerly of Lafayette in Macon County TN. Jerry will be buried in the family’s plot with his loving mother and father at Spring Hill Cemetery in Madison TN. Honorary pallbearers are Fred Haddad of Ft. Lauderdale, Robert Wimmer, and Wayne Douglas, both of Georgia, Fred Luther, Jr. of Franklin TN, Jerry Vaisard of Alabama, and Stan Thomas of El Centro CA, Dallas and Vance Potts of Columbia, TN. Active Pallbearers are Howard Felton, Pete Lopez, Fred Sadler, Terry Todd, and William “Bill” Farmer. Jerry always remembered his formative and fortunate upbringing. While growing up in Madison, he and his friends could be found at the Madison-Inglewood Fire Department with Chief Robert R. Poe whom everyone in the community admired. Industrious, Jerry worked all positions at the new Montague Drive In and at Donald Duck drive-in. As a student, he was an earnest drummer in the Rams marching band and graduated from Madison High School. He attended David Lipscomb College and eventually relocated to Ft. Lauderdale FL, where he then began a lifelong career in the auto industry. Initially managing a parts store, he purchased a salvage business which he successfully managed before selling and entering into lifelong employment with General Motors. He managed sales and service of the Ft. Lauderdale, Palm Beach County GM dealership for 35 years, and was the production leader for 26 years in the SES Society of Sales executives. He was assigned to New York and helped Grummon Olson Body Division in Long Island develop the United States Postal Service delivery truck in 1990 for which GM delivered 10,000 units a year for nine years. He was awarded six trips to the NFL Super Bowls and also a trip to China of which he let someone else attend. He was an avid NASCAR fan attending 23 Daytona 500 races. He was a golfer and attended many GM sponsored tournaments at major golf courses in Florida and California. He settled in Carlsbad CA where he continued with GM sales, never waning in enthusiasm for GM products. In 2016 he retired, and relocated to the beauty of Yuma AZ. As a leader, Jerry, will be dearly missed by his loving family and his many personal and business friends. Visitation will be at Phillips-Robinson Hadley Chapel Tuesday, August 24th from 4-8pm . Services will be conducted Wednesday, August 25th at 1:30pm in our Chapel, Brother Don Loftis officiating. Interment will follow at Spring Hill Cemetery. The family respectfully requests rather than flowers, any thoughtful tributes be made to the Cancer Society for the treatment of leukemia. Phillips-Robinson Funeral Home Hadley Chapel, 1700 Hadley Ave. (615)847-1010.

Jerry Lee Potts, GM Sales Executive, passed from this earth on Wednesday, August 18, 2021. He is survived by the love of his life, Jeraldine Ann Rosota, whom he met on the Fort Lauderdale beach. They were married on June 22, 1963 and his dear... View Obituary & Service Information

The family of Jerry Lee Potts created this Life Tributes page to make it easy to share your memories.

Send flowers to the Potts family.