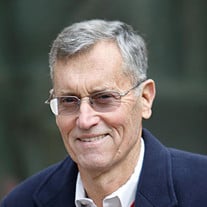 Jeffrey Eugene Drifmeyer, PhD MS MPH, was born, September 7, 1948 in Washington, DC. Jeff was called to the Lord on July 31, 2020 at home in Nashville, Tennessee after a courageous, decade-long battle with neuroendocrine cancer. Loving husband of Gina, formerly of Williamsburg, Virginia and father of Erin (David) Moga, of Blaine, Minnesota and Julie (Patrick) Shaffner, of Nashville, and Grandpa of Eleanor, Michael, Nicholas, and Clementine. He is also survived by his parents, Helen and Eugene, formerly of Alexandria, now Harrisonburg, Virginia, and siblings: Ken (Gail), Sally Mielcarek, Polly (Jay) Ashby, Barrett, and Matthew. Jeff grew up in Fairfax County, Virginia, graduating from George Mason University, University of Virginia, and Johns Hopkins University. He served honorably in both the United States Marine Corps Reserve and in the Army Medical Service Corps as an environmental science officer, with duty throughout the U.S. and abroad, retiring after a 20-year career as Lieutenant Colonel. Jeff led many research studies in environmental public health, published numerous articles, and taught at the Uniformed Services University of Health Sciences and the College of William & Mary. His dedicated work received numerous awards including best research paper, and an award for excellence in collaborative leadership. His writing included two books, the narrated nonfiction, Civil War Comes Home, and the novel, When Pigs Flu… under pen name, ‘Jake McKenzie.’ Jeff was an avid gardener, novice beekeeper, artist adept in paint and stained glass, and was a master at puttering in the shed. All who knew him were touched by his generosity and kind spirit. He is loved beyond measure by his family and is greatly missed. In lieu of flowers, remembrances are invited for the ongoing research effort on neuroendocrine cancer at: LSU Health Foundation, 200 Tulane Ave., New Orleans, LA 70112. The family thanks his many caregivers throughout the years, Drs. Eugene A. Woltering and J. Philip Boudreaux of LSU, and nurses Bettye Simmons and Mary Giguere of Ft. Eustis, Virgina, and Sarah of Alive Hospice. Funeral Service will be at Holy Name Catholic Church, 11:00 am , Wednesday, August 12, 2020, and Arlington National Cemetery at a later date.

The family of Jeffrey Eugene Drifmeyer created this Life Tributes page to make it easy to share your memories.

Send flowers to the Drifmeyer family.