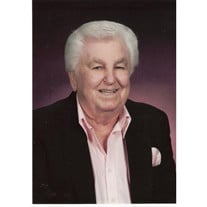 Age 86 of Nashville. Born May 29, 1924 in Nashville, TN to parents Vester Pearl and James Lloyd Elkins. Preceded in death by his parents, his first love of his life, wife, Bonnie Jean; son, Tommy "T. Tommy"; and brother, Charles "BABE" Elkins. Survived by the second love of his life, soul mate, and loving wife, Ruth Elkins; son, Russell; daughter, Michelle (John) Langlois; brother, Harold (Sara) Elkins of Old Hickory; sister, Janice (Paul) DesMarteau of Mt. Juliet; grandchildren, Jessica Elkins, Scarlett (David) Anderson, and James Petre, III; great-grandchildren, Sarah Ozment, Evan Eden, Sunni Rae Eden, and Ethan Wyatt Anderson; two furry four legged kids, Coco and Chanel, whom he loved and gave him lots of happiness in his later years; many nieces and nephews. He attended Cohn School in West Nashville and then joined the US Navy in 1941. After leaving the Navy he married Bonnie Jean Grubbs in Franklin, KY in 1946, right after the war. They drove up in their black Chevy convertible that he bought from "Jim Reed". In May of 1948 their first child, James Russell, was born. Then a couple of years later, in November, came their second child, William Thomas. Then in 1964 their third child, a little girl named Jean Michelle, was born. At the time he was running a gas station and working on the N & C Railroad. Jimmy was known at one time for selling cars at 8th and McGavock. In one year he sold 720 cars all by himself and was called the new car boot-legger! Later he became the owner of J & J Market in East Nashville. His wife, Jean became ill with breast cancer and lost her battle in March of 1971. One week after he lost his wife, he also lost his Mama. Then in August he lost his Dad. Five years to the day that he buried his father, his youngest son, Tommy was killed. At one point in his life he worked as a court officer for Judge Gale Robinson, Sr. and Judge Summers. Later he opened Fairview Liquors in Fairview, TN. In 1974 he became involved with the Continental Condominiums in Panama City Beach, FL and served on their Board of Directors for 25 years. Sometime during the early 70's he purchased some land in TN where he built the Drive In Market and Liquor Store. He was a standing member of the Madison Elks and the American Legion Post 82. Jimmy enjoyed playing golf and watching football, basketball, baseball, Nascar, and wrestling. He loved golf so much that he even had a putting green in his front yard. He helped start the TWO RIVERS SENIOR GOLF CLUB. He was a founding member of the famous SO WHAT CLUB. He was once a member of Dalewood Baptist Church but died a member of St. Joseph Catholic Church in Madison. Visitation at Phillips-Robinson Funeral Home Friday from 4-8pm, Saturday and Sunday from 12-8pm, and Monday from 1pm until the time of service at 2pm at St. Joseph Catholic Church, 1225 Gallatin Rd. Madison, TN 37115, Fr Ed Steiner and Fr Joe McMahon officiating. Interment at Spring Hill Cemetery. Pallbearers: Tami Leanardo, Jim Tyree, Grover "Sonny" Locke, Jim Johnson, Tom Cone, James A. Petre, III, Paul Demautaux, Randy Coleman, and John Steinhouse. Honorary Pallbearers: current and former Board of Directors of Continental Condominiums of PCB, FL, all "So What Club" members, past and present Davidson County Judges, John A. Hobbs, Bob Frensley, Joe Hobbs, Charlie Cardwell, Past Metro Fire Chief Martin Coleman. In lieu of flowers please make memorials to the Susan G. Koman Breast Cancer Fund, American Stroke Association, St. Joseph Catholic Church, or Safe Haven Maltese Rescue, [email protected] A special thanks to Dr. Daryl Nichols, Dr. Ken Rankin, Lisa, RN, and staff at Skyline Hospital Neuro ICU.

The family of James T. Elkins created this Life Tributes page to make it easy to share your memories.

Send flowers to the Elkins family.